Tory changes to election boundaries will redraw the political map by ignoring those with the least power – the poor, young people, and ethnic minorities.

That’s the stark warning from the Electoral Reform Society (ERS) over proposals from the independent Boundary Commission review ordered by the (now defunct) Conservative-Lib Dem coalition.

The ERS highlighted five major failings in the plans and their threats to a healthy democracy:

1. Changes are based on registered voters rather than actual population.

Katie Ghose, Chief Executive of the ERS, said this ‘risks skewing our democracy’. She explained:

‘Areas with the lowest levels of registration are often those that already have the least voice in politics.

Young people, some ethnic minority groups and those in the private rented sector are all less likely to register to vote than others.

That makes many of them effectively cut out of the new political map.’

2. Changes are based on outdated figures that leave out two million people.

Ghose said the review is using an ‘incomplete register’ from December 2015, ignoring people who have registered since then. Some constituencies have grown as much as ten per cent, as this table shows: 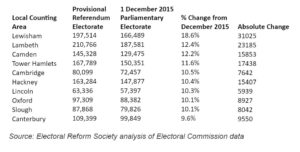 Five of the top ten increases (and four of the top five) are in London, with Lewisham seeing the biggest growth at 18 per cent.

Ghose said: ‘The review is being undertaken on the basis of a register that’s nearly a year out of date, excluding over two million people who signed up between December and June. That means some regions are two seats short of what they are owed.’

In the name of ‘equalising’ the size of constituencies with a five per cent maximum size difference, the changes could draw lines across natural borders that have existed for decades.

Ghose said: ‘Fair political boundaries are crucial to ensuring people are properly represented in parliament. But we shouldn’t tear apart close-knit areas in a rush to ‘equalise’ numbers.’

The five per cent cap could also mean ‘huge disruption every five years through sparking a boundary review for every election’.

‘If you reduce the number of MPs in parliament without reducing the number of ministers, you increase the power of the executive and make it more difficult to challenge the government.

That will reduce the ability for parliament to do its job of holding the government to account.’

5. Meanwhile, we are getting more Lords and no PR.

You can tell much from the government’s making boundary review a priority over House of Lords or electoral reform – obvious choices if you are actually interested in making the UK more democratic.

‘Cutting the number of MPs is the wrong priority. We have a growing unelected House and a shrinking elected one.

The House of Lords is a super-sized second chamber – second only to China – and shockingly poor value for money.

Surely it would be more democratic to address the crisis in the House of Lords than to cut the number of elected MPs?’

On electoral reform she added:

‘The government talks about the need to ‘make every vote count’ through these changes. Yet the best way to do that – the elephant in the room – is the need for a proportional and fair voting system.’

See: The Tories’ first week of explaining Brexit has been tortuous

6 Responses to “Young, poor and minorities ‘cut out of map’ in Tory boundary changes”