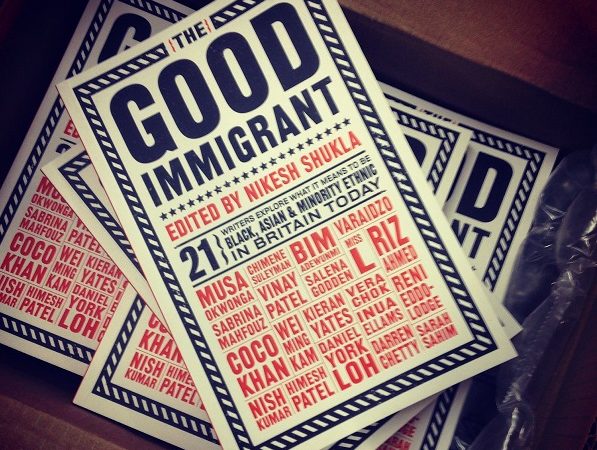 “What’s it like to live in a country that doesn’t trust you and doesn’t want you unless you win an olympic gold medal or a national baking competition?”

So reads the blurb on the dust jacket of The Good Immigrant, a book of essays edited by Nikesh Shukla. This incisive quote articulates feelings of not belonging that will likely be familiar to many people of colour in the UK. This book says: let’s take matters into our own hands.

In the 254 pages of The Good Immigrant Shukla has gathered together 21 black, Asian and minority ethnic contributors — each with their own chapter. Individually and together they explore what it means ‘to be a person of colour now’.

This tour de force, crowdfunded on publishing platform Unbound (disclaimer: I pledged to help get the book published) is a nuanced look at the state of race, immigration and nationality in Britain and beyond.

It is a collection of essays rich in meaning. They contain elements of humour; Shukla’s chapter ‘Namaste’ makes light of restaurants that offer chai tea:

There are moments of beautiful honesty; Reni Eddo-Lodge explores identity in a world that too often fails to represent blackness as nuanced and diverse. She articulates what it is to find your own sense of being regardless, ‘to be an immigrant, good or bad, is about straddling two homes, whilst knowing you don’t really belong to either’.

And moments of justified anger: Musa Okwonga’s searing critique of UK society reveals how unrelentingly difficult it is to live in a country that virulently demonises immigrants and fails to deal with systemic racism.

This is a book that should be read by everyone. It takes on the one-dimensional stereotypes that cage people of colour in a box marked ‘stereotype’ or ‘other’. As well as pushing for and itself signifying change, this book is a space of relief for people of colour who are used to navigating a society that makes them feel unwelcome. It is a reminder that ‘straddling two homes’ is not unusual.

In the pages of this book there is also a rallying cry: this group of writers tell us in their own ways that we can carve out a space for ourselves and in the process work together to remould what’s considered normal.

The Good Immigrant powerfully challenges the conventional narratives and the conventional voices we are fed from an early age — when we are led to believe that whiteness is the norm. Because as Darren Chetty makes clear in his essay, an earlier version of which featured on the site Media Diversified, stories don’t have to just be about white people.

Highlights include Chimene Suleyman’s piece is a moving examination of language and naming. In their respective essays, Vera Chok and Wei Ming Kam reveal in different ways the all too often ignored anti-Chinese sentiment that lurks in this country. And Salena Godden incisively picks apart the way shade decides worth, noting ‘universally we are divided and whatever shade you are born it is not right or good enough’.

Crucially, the damaging legacy of the British colonial project prowls these pages. The Empire was built on racial hierarchies and the subjugation of peoples across the world. During colonialism, constructed racial difference helped Britons define their national identity in relation to the racialised ‘other’, considered inferior to European whiteness.

What relevance does this have now? We live in a country where 44 per cent are proud of Britain’s colonial past, while only 21 per cent regretted that it happened. A history of bloodshed, brutality and oppression if not ignored has often, then, been mythologised. And so, the racial hierarchies, these writers show, persist. But in an altered form.

It’s tempting to label this book ‘timely’. When xenophia has a tight, visible grip on UK politics and racism spills out onto the streets in the form of violent attacks, it is a literary life raft; injecting reason and humanity into this hate-filled climate. But limiting it to this would be to a disservice to Shukla and the book’s contributors.

It gives people of colour and their myriad experiences space in a society where these voices are silenced, sidelined or weaponised for political purposes. It speaks to the problems of multiculturalism that existed well before pictures of a jubilant, post-Brexit Nigel Farage were splashed all over the news.

It uncovers the racism that for a period of time went underground. And it shows just how poor representation is for people of colour in public life.

For these reasons it is not just timely: it is a crucial read that says enough is enough.

Maya Goodfellow writes for Media Diversified, The Independent, The Guardian and LabourList

4 Responses to “What’s it like to live in a country that doesn’t trust you?”