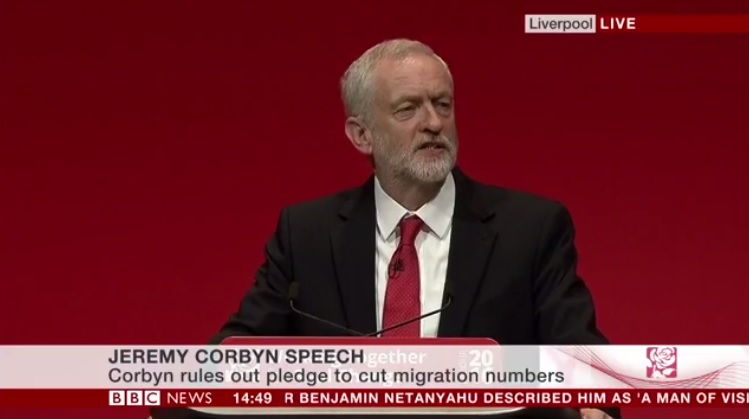 Jeremy Corbyn called on members to ‘end the trench warfare and work together to take on the Tories’ in his speech today at Labour conference.

The newly re-elected party leader praised the work of MPs, councillors and members across the country, including Owen Smith’s campaign and time as Shadow Work and Pensions Secretary, calling for party unity against the Tory government.

Corbyn threw bones to all sides of the party, with radical policies on tax evasion and rail nationalisation, but also a call not to ‘patronise or lecture’ Brexit voters concerned about immigration.

He also condemned anti-Semitism and misogyny inside the Labour Party, calling the former ‘an evil’ Labour would fight ‘with every breath in its body’.

He began by praising the families who campaigned for justice over the deaths at Hillsborough football club in 1989:

‘I know some people say campaigns and protests don’t change things, but the Hillsborough families have shown just how wrong that is.’

But he stressed the importance of Labour being in government, saying:

‘So yes, our party is about campaigning and it’s about protest too. But most of all it’s about winning power in local and national government, to deliver the real change our country so desperately needs.

That’s why the central task of the whole Labour Party must be to rebuild trust and support to win the next general election and form the next government.

That’s the government I am determined to lead, to win power to change Britain for the benefit of working people.’

He also quoted Jo Cox MP, who was killed earlier this year, in saying ‘we have more in common than that which divides us’.

Labour leader @jeremycorbyn channels the words of the late Jo Cox in his #labconf speech https://t.co/a0RmWsaYQJ

Corbyn referred to his ten pledges, which have been adopted by the party, and added some new policy announcements. He said Labour would stop arms sales to any country committing war crimes, such as Saudi Arabia, and pledged three per cent of GDP for research and development spending.

He also said ‘immigration can certainly put extra pressure on services’ and promised to reinstate the Migrant Impact Fund with ‘extra support to areas of high migration’ funded by a citizenship applocation fee levy.

Corbyn’s remarks on Brexit and ‘left behind’ voters will likely be welcomed by Labour’s right. He said:

‘Although most Labour voters backed us [in the EU referendum] we did not convince millions of natural Labour voters especially in those parts of the country left behind.

Left behind by years of neglect, under-investment and deindustrialisation.

Now we have to face the future together we are not helped by patronising or lecturing those in our communities who voted to Leave.

We have to hear their concerns about jobs, about public services, about wages, about immigration, about a future for their children. And we have to respect their votes and the decision of the British people.’

He added this does not mean ‘giving a blank cheque to Theresa May and her three-legged team of fractious Brexiteers’ – a reference to David Davis, Liam Fox and Boris Johnson.

To huge applause and a standing ovation, Corbyn closed by saying the party was half-a-million strong, and that:

‘United we can shape the future and build a fairer Britain in a peaceful world.’