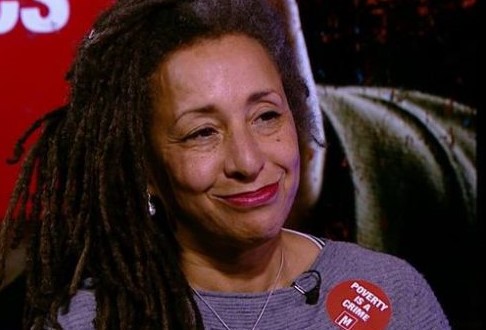 As a researcher at HOPE not hate, a historian of fascism and a proud member of the Holocaust Memorial Day Trust Board of Trustees, I read the comments by vice-chair of Momentum Jackie Walker with a mixture of shock and sadness.

Speaking at a much-needed training session on antisemitism at the Labour Party conference, Walker asked: ‘Wouldn’t it be wonderful if Holocaust Day was open to all peoples who’ve experienced Holocaust?’

Walker, who was previously suspended from the party over alleged antisemitic comments on Facebook, also appeared to denigrate the need for security at Jewish schools – at a time of heightened terror risks and international attacks against Jewish targets in Europe over the past few years – stating: ‘I still haven’t heard a definition of antisemitism that I can work with.’

Walker has since offered half an apology for any offence caused, though she does not seem to have fully retracted her statements regarding HMD. However, the question remains why she made such ill-informed statements in the first place.

To say things aren’t made clear, as Walker suggests, is clearly a result of her failure to engage with Holocaust Memorial Day itself. Anyone who has attended any of the thousands of HMD events (there are about 5,500 every year up and down the UK) would know how inclusive they are, especially the wonderful national event.

Those who watched last year’s national commemoration on TV or in the audience will not have forgotten the heartbreaking and shocking film, The Bosnian War, featuring Omarska concentration camp survivor Kemal Pervanić.

The charge that HMD is not inclusive enough was also recently levelled by students during the National Union of Students (NUS) conference. Why has such a fallacy seemingly gained traction on parts of the Left? Sadly, the short answer seems wilful ignorance.

The Holocaust was a unique historical event and the scholarly literature surrounding it is vast. The Final Solution was designed to exterminate every single Jewish man, woman and child, thus marking this genocide out as unique in the modern age.

Either purposefully or by mistake, some appear to misunderstand declarations of uniqueness as an attempt to detract from the suffering of other groups in other conflicts and facing other persecutions. It is nothing of the sort.

For some, undermining the uniqueness of the Holocaust can be a means to undermine the legitimacy of the state of Israel, which they argue draws this legitimacy from the ‘use’ or even ‘abuse’ of the Holocaust. While criticism of Israel and its policies is perfectly acceptable, any attempt to minimise or relativize the Holocaust for political aims in this manner is shameful. Paradoxically it also undermines the legitimate Palestinian struggle.

While the Holocaust Memorial Day Trust is absolutely right to commemorate subsequent genocides, and does so proudly, one can’t help but ask why Walker has an issue with commemorating the mass extermination of six million Jews in its own right?

Clearly her latest statements are bad enough but it is worth remembering that she has been caught out before, writing on Facebook: ‘What debt do we owe the Jews?’ and stating that Jews ‘were the chief financiers of the sugar and slave trade’.

The myth that Jews were behind the slave trade is an import from the American antisemite Louis Farrakhan and the Nation of Islam, who pushed the idea in a book titled The Secret Relationship Between Blacks and Jews: Volume One.

The conspiratorial antisemitism of the book was exposed by all serious scholars with Henry Louis Gates, Jr. at Harvard University calling it ‘The Bible of new anti-Semitism’ and stating that it ‘massively misinterprets the historical record, largely through a process of cunningly selective quotations of often reputable sources’.

In 1995 the American Historical Association issued a statement condemning ‘any statement alleging that Jews played a disproportionate role in the Atlantic slave trade.’

The fact that Walker repeated this antisemitic trope shows that she is, at the very least, susceptible to believing negative antisemitic stereotypes. When viewing her latest comments in the context of her history of similar prejudicial statements, it seems clear that her position at Momentum should also be untenable.

It is true that some people on the Right are using antisemitism as a charge to attack the Left, yet it is also true that there is a problem with leftwing antisemitism. The two are not mutually exclusive.

Jeremy Corbyn’s comments yesterday condemning antisemitism as evil are a welcome departure from general denouncements of ‘all prejudice’. Now it is time to move beyond words and condemnations and to act against those engaging in or being sympathetic towards antisemitism within the Labour Party.

Joe Mulhall is senior researcher for HOPE not hate, where this blog was orginally published. Follow him at @JoeMulhall_