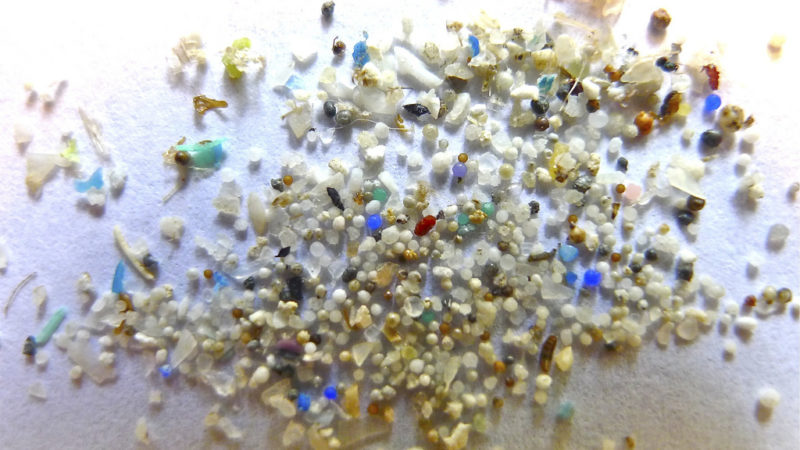 The sun has been out in full force this month, and, if you’re lucky, you might have had a chance to enjoy the seaside. What you wouldn’t have seen are the tiny plastic particles that are contaminating our seas, rivers and oceans.

This pollution – microplastic pollution – is something that parliament’s Environmental Audit Committee, which I chair, has been investigating. We published the final report last week.

Microplastics are small abrasive beads that wash down the drain. Most of us would be horrified to learn how many bathroom products contain this plastic rubbish: they are in facial scrubs, toothpastes, washing powders, household cleaners, and even clothes.

Did you know that washing a fleece can release one million microfibres, which go down the drain and into the sea? Or that a single shower can result in 100,000 plastic particles entering the ocean?

An estimated 86 tonnes of microplastics from cosmetic products used in the UK wash into the sea every year. There they are eaten by fish, shellfish and other marine life.

Over one in three fish in the English Channel are now contaminated with microplastic particles: stuck in their stomachs, they reduce their ability to digest food and can stunt growth. They are also harmful to the tiny sea creatures that fish eat.

Microplastics can end up on our dinner plates, too. Scientists estimate if you’ve eaten six oysters then you have probably eaten around 50 microplastic particles.

And we have no idea what impact this could have on human health. Seabirds are also suffering. A typical seabird carries up to ten per cent of its bodyweight in plastic in its stomach – something to remember next time a gull makes a dive for your ice cream.

What can we do? Cosmetics companies have agreed to phase out microbeads on a voluntary basis by 2020. This simply won’t wash. Up to 200,000 tonnes of microplastics are already entering EU seas every year. What’s more, the UK is behind the curve.

President Obama has led the way on banning microbeads in facial and body scrubs by 2020, while Sweden, the Netherlands, New Zealand, Canada and Kenya are already considering bans of their own.

So my committee is pushing for a full legal ban, preferably at an international level – as pollution does not respect borders.

The EU has been crucial to cleaning up our beaches and rivers, tackling air pollution and protecting our biodiversity, and an EU-wide ban would be the best solution for tackling microplastic pollution.

If this isn’t possible after our vote to leave the EU, the Environmental Audit Committee is calling on the government to introduce a national ban by the end of next year.

While we’re waiting to hear whether Theresa May’s government will try to tackle microplastic pollution, you can check if your favourite scrub contains microbeads with the handy ‘Beat the Bead’ app.

It allows you to scan any product’s barcode and find out if it contains microplastics: www.beatthemicrobead.org.

Mary Creagh MP is Chair of the Environmental Audit Committee.

One Response to “Microbeads: Theresa May should take action and ban these tiny plastics”