Throughout the junior doctors dispute, Hunt has insisted that the Tories are continuing Bevan's work 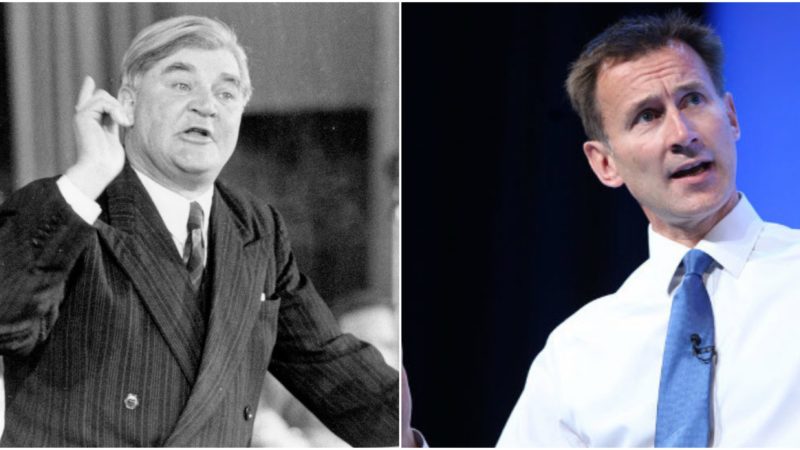 The recent rejection of the government’s contract offer by junior doctors means the end of a very bitter public dispute may not yet be in sight.

One thing that has been clear throughout the dispute is that whenever a debate over anything linked to the health service arises, Aneurin Bevan, the chief architect of the NHS, is inevitably mentioned. The Conservative Party are proof of this.

In an interview with Andrew Marr, the Secretary of State for Health Jeremy Hunt reminded viewers that Bevan fought against an obstructive BMA when he was attempting to bring forward plans to establish the NHS; Hunt argued that this situation was being echoed today.

Furthermore, in March in the House of Commons, Hunt said that when Labour had to decide ‘whether to back vulnerable patients…or the British Medical Association, which opposes it—Labour has chosen the union’

He reminded the House that Bevan once said of the BMA: ‘this small body of politically poisoned people have decided to…stir up as much emotion as they can in the profession…they have mustered their forces on the field by misrepresenting the nature of the call and when the facts are known their forces will disperse’.

More recently Hunt argued that ‘had Nye Bevan given way to the BMA there would be no NHS’.

David Cameron continued the Bevan themed rhetoric, saying in February that ‘if Nye Bevan were here today, he would want a seven-day NHS, because he knew that the NHS was for patients up and down our country’.

A Conservative Prime Minister claiming that one of the Labour Party’s heroes would support a Conservative Government’s policies must seem like sacrilege to Labour members.

Labour leader Jeremy Corbyn reacted as expected, arguing that Bevan would be ‘turning in his grave’ if he saw Cameron’s attitude to the NHS.

Hunt has previously spoken of Bevan creating the NHS ‘four years after a Conservative Health Minister [Henry Willink’s White Paper A National Health Service] suggested it’; but challenging the narrative of ‘Bevan’s NHS’ is a difficult thing to do.

The NHS is seen as his legacy, highlighted by the many Bevan quotes appearing on placards and social media posts supporting the junior doctors.

Firstly, the Tories can use Bevan to try and win sympathy by showing that the revered Bevan also fought against the BMA.

Secondly, the Tories can take Bevan’s phrases such as the need to ‘universalise the best’ and then claim to be following his principles. In Jeremy Hunt’s words: ‘The vision of Nye Bevan before – the vision of a one-nation Conservative Party today.’

It is not hard to imagine what Bevan would have thought about the Conservatives invoking him in such arguments.

He (in)famously once said: ‘no amount of cajolery, and no attempts at ethical or social seduction, can eradicate from my heart a deep burning hatred for the Tory Party…So far as I am concerned they are lower than vermin.’

Hunt’s attitude during this dispute may have inspired similar feelings within the junior doctors’ minds – he has clearly failed to convince them to agree to a new contract.

However, he has survived Theresa May’s cabinet reshuffle, a decision which is unlikely to be good news to junior doctors who face having the contract imposed on them.

But remember, this is not the first time the Tories have referenced Bevan when making arguments over health. When attacking Labour in 2012 David Cameron said that Bevan would be ‘spinning’ in his grave if he saw the state of the NHS in Wales, where Labour are in charge.

The only spinning likely is from the Conservatives as they try to invoke Aneurin Bevan’s legacy.

Nye Davies is a postgraduate researcher at the Wales Governance Centre at Cardiff University. His research focuses on the political thought of Aneurin Bevan.

4 Responses to “Why does Jeremy Hunt keep comparing himself to Aneurin Bevan?”