The Brexit press are excited. Here's the bad news. 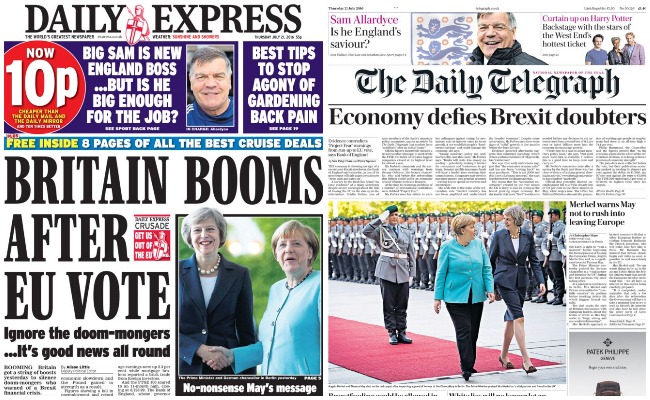 Today’s papers carry stories about a Bank of England report which they say finds ‘no Brexit slump’, with some making claims of a ‘boost’ to the economy since June 23.

It’s worth recalling that just a few weeks ago, Brexiters (and the pro-Brexit press) were telling us to ignore the Bank of England’s economic forecasts about leaving the EU…

Still, since the news today puts a positive spin on the Agents’ Summary of Business Conditions, released by the BoE yesterday, we thought you should know what it actually says.

First, here are some corrections:

1. The BoE didn’t say it was ‘business as usual’ post-Brexit. This is how the story appeared in many papers. But here’s the relevant passage:

Many firms had only just begun to formulate new business strategies in response to the vote and, for the time being, were seeking to maintain ‘business as usual’.’

In other words, no-one knows what is going to happen, so they are trying to carry on as normal, while making plans for the Brexit fallout. Meanwhile, uncertainty has ‘risen markedly’.

2. The BoE didn’t say there is no impact on investment or jobs. Again, this is an incomplete quotation, and creates a false impression. Here’s the passage:

‘A majority of firms spoken with did not expect a near-term impact from the result on their investment or staff hiring plans.

But around a third of contacts thought there would be some negative impact on those plans over the next twelve months.’

Most firms don’t expect less investment or fewer jobs in the short-term, though a third believe there will be within a year. Great.

That’s just from the summary.

What else does the report say?

‘As yet, there had been few reports of major alterations to businesses’ employment intentions.

But the vote to leave was expected to have a negative effect overall on hiring activity over the coming twelve months.’

Meanwhile, companies are planning ‘strategic reviews of their operations over the coming months in light of the vote.’

‘As yet, there were few suggestions of disinvestment, such as exiting the United Kingdom in the near term, but there were a few reports of planned foreign direct inward investment being postponed.

A number of companies were considering alternative European locations for aspects of their business, and some contacts within large international firms expected their continental European operations to receive a greater share of future investment than their UK ones.’

Business contacts reported ‘reductions overall in corporate deal-making activity, as some planned mergers and acquisitions and corporate finance activity had been paused or cancelled.’

And housebuilding companies are ‘more cautious’ about acquiring land to build on:

‘More generally for construction firms, there were expectations that output growth would slow over the coming year as companies became more cautious about initiating projects.’

At the same time, consumer spending has been ‘more hesitant around purchases of higher-value goods’, and is ‘vulnerable’ to there being less disposable income ‘as the fall in sterling was passed onto higher consumer prices’. Pension deficits were ‘likely to have increased’.

‘In terms of the supply of labour, there was substantial concern about potential reductions in the availability of eastern European labour among companies whose staffing was heavily reliant on those employees.’

And prices for companies are ‘likely to increase as the fall in sterling’ has caused ‘higher import costs’. This is already affecting farmers, manufacturers, and the construction sector:

‘The cost of retail goods was expected to increase over a year or more, with fresh food costs beginning to rise within the next three months.’

Retailers are ‘seeking to minimise increases in consumer prices’ – but ‘minimise’ doesn’t mean ‘prevent’. Higher prices is just what Britain needs as the government defends austerity.

If the picture above looks more like the one painted by ‘Project Fear’ than today’s newspapers, you have to wonder why, since we’re using the very same source material.

MediaWatch is Left Foot Forward’s progressive take on the press and broadcast media.

6 Responses to “No Brexit blues? Here’s what the Bank of England really said”