Farage may find his own messages entertaining, but for many of us they are terrifying 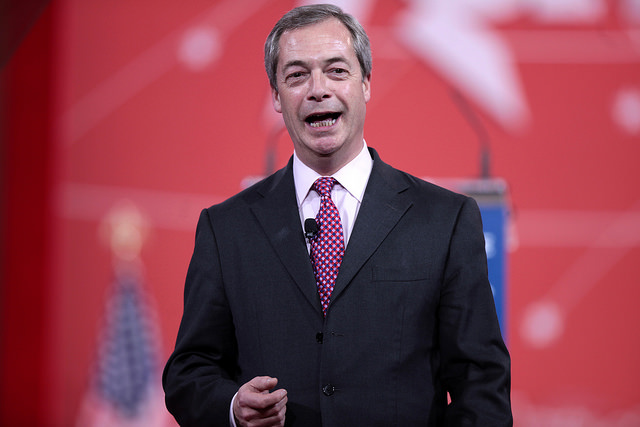 “Most of it, I have to say, has been tremendous fun.”

These were the words of a seemingly contemplative Nigel Farage as he looked back on his political career after announcing he would – for the second time in fourteen months – be standing down from his position as UKIP party leader.

Fun. This was his way of describing his time as a politician.

How amusing it must have been for him: pushing anti-immigration sentiment until it spilled out onto the streets in the form of rising numbers of hate crimes, playing on peoples’ fears by telling them ‘foreigners’ are the problem in the UK, and holding up mistruths as facts because the ideas born out of his own head better fit his narrative.

This, apparently, is Nigel Farage’s idea of entertainment. For a lot of us, it’s been terrifying.

Under a month ago, Farage stood proudly next to an overtly xenophobic poster, which showed a queue of mostly minority ethnic migrants and refugees. Next to this picture a slogan screamed ‘Breaking point: the EU has failed us all’.

It was representative of his career; attacking immigrants, and racialising them when needed, to hold ‘them’ up as a threat.

In recent years he’s said immigrants were to blame for traffic on the M4, London was suffering a ‘Romanian crime wave’, Muslims symbolise a ‘fifth column’ that ‘hate’ and ‘want to kill’ other Britons and that we don’t need laws to prevent race discrimination.

For all the fun he might have been having, his career has been made up of a series of inflammatory messages that he’s aggressively trumpeted whenever he’s been given air time.

In doggedly spreading this xenophobic message Farage has helped to push the political narrative to the right.

Racist and anti-immigrants politics are certainly not the sole preserve of UKIP; think the Tory’s racist Smethwick 1964 election campaign or former Margaret Thatcher and John Major aide’s description of the party as ‘essentially racist‘.

But Farage’s party have certainly made the situation worse. After years of UKIP pursuing an anti-immigration agenda, at the last general election the Labour Party capitulated and joined the fray, pledging ‘controls on immigration’.

The level of acceptance that migration is problem is astounding.

Farage’s ability to blithely bask in the politics of hate and fear that have characterised his two decades as a UKIP politician speaks to a fundamental problem in our politics.

It isn’t a game: the words that fall out of politicians’ mouths have real consequences for the population but far too few for the people that utter them.

He should not be uncritically heralded as successful. He wanted the UK to leave the EU and now it will, some might say.

But this all depends on how you define success; if you achieve your goal by stoking hate and demonising people just because of where they were born then your accomplishments, it seems, are pretty tainted.

Nor should he be dismissed as a divisive irrelevance; it’s important to understand why his message was so powerful.

It would be a huge mistake to think Farage is the sole architect of the UK’s toxic politics.  He is not alone in capitalising on peoples’ feelings of powerlessness and frustration to direct blame towards migrants.

Do not celebrate his departure for too long. UKIP’s march will not necessarily abate because its leader can’t figure out how to lead now he’s got his own way and anti-immigrant politics – happily embraced by many Tories – will not disappear. The challenges for the left are still huge.

Farage is one of many who have used anti-fact politics to suit his agenda. Throwing evidence out the window he has made a career out of scapegoating migrants: he has helped make our politics worse.

The reason it’s been fun for him? He can walk away from the mess he’s helped to create.

Maya Goodfellow writes for Media Diversified, The Independent and LabourList

One Response to “For Farage, spreading fear and hate has been ‘tremendous fun’”