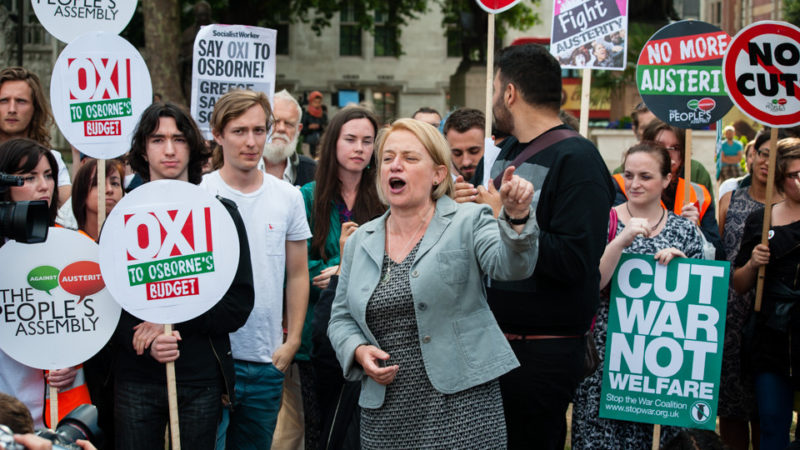 There’s a lot of anger in Britain at the moment.

Anger about low wages and insecure employment, anger about crowded schools and hospitals, and the lack of council housing, indeed lack of housing that people can afford to live in or even aspire to buy.

It’s anger that’s being expressed by many who are directing it towards a Leave vote in the European referendum.

They’ve been told by the Leave campaigns that stopping immigration and leaving the EU will solve those problems.

For it’s misdiagnosing the cause of the problem – and providing entirely the wrong solution. It will create a whole new set of problems without solving any of our existing problems.

The anger should be directed at Westminster, not Brussels.

It can be rightfully directed at David Cameron, but replacing him with Boris Johnson is no kind of answer.

It should be directed at the neo-Thatcherite policies that have dominated our political mainstream for decades, not the directives and rulings from the EU that have tempered some of the worst excesses of neoliberalism.

It should be directed towards the Tories who’ve gone where even Thatcher dared not tread, privatising ‘the Queen’s head’, attacking the disabled, victimising young workers.

Our low wages and insecure jobs come from an economy that political choices over decades have allowed to be dominated by tax-dodging multinational companies that rely on low-cost labour instead of investment in training and technology to make the goods we need and grow the food we need.

And from an inadequate minimum wage, inadequately enforced. Don’t let anyone tell you that George Osborne is introducing a ‘living wage’.

The real living wage is calculated each year by the Living Wage Foundation – and now set at £8.25/hour (£9.40/hour in London), not the £7.20/hour of Osborne’s fake living wage. And it is paid to all workers, not just the over-25s.

And the pressure on our NHS?

Well that’s due to the racing privatisation that’s shovelling funds that should be spent on health care into private pockets, while the ‘internal market’ in the NHS costs us billions each year.

Make those multinational parasites pay their taxes and there’s plenty of money for the NHS. Working together with our neighbours will make that easier than if we go it alone.

Well I could just say ‘Michael Gove’, but I’ll add that our government is preventing the local authorities that have the responsibility for providing places from planning to ensure them, with its disastrous, scarcely veiled privatisation agenda of free schools.

And our housing crisis?

That isn’t caused by the EU. It’s caused by the decision in the Seventies to stop building council housing, and to privatise the existing stock through ‘right to buy’.

That’s left the market to provide housing for decades, and it has failed to provide the housing we need.

So I’d urge you if you’re thinking about voting for Brexit because you or your children can’t get a job you can build a life on, hang on to that anger.

If you’re thinking about voting Brexit because you couldn’t get a school place or you’re worried about losing free NHS treatment, acknowledge and talk about that anger.

If you’re worried that your children will never be able to afford to buy a home, say that to all who’ll listen.

But direct that anger towards the right target – towards the kind of politics we’ve had here in Britain for the past three decade, towards the policies of austerity, privatisation and environmental destruction threaten all of our futures.

A Brexit vote tomorrow would take away critical protections – for workers’ rights, for our environment, for human rights – and make the forces that have delivered the Britain we have now even stronger. It would reduce the constraints on them.

A Remain vote would direct the anger to the right place – not just at David Cameron, but the whole Tory party and the policies that have dominated in Britain for decades.

A Remain vote is not an end of this process of political change, but the start of a new kind of politics.

A shift to the rightful direction of anger towards the toppling of this Tory government, towards a fundamental transformation of the failed electoral system that allowed it to take power with the support of just 24 per cent of eligible voters, to the establishment of a new political common sense that ensure nobody has to worry about putting food on the table or keeping a roof over their head while we all collectively live within the environmental limits of our one fragile planet.

Vote Remain, then let’s turn with our fellow campaigners across the continent, our neighbours and friends, to build the real changes needed to produce a society that works for the common good, not for the  one per cent.