Immigration, red tape and bananas as Johnson, Kendall, Patel and Salmond square off 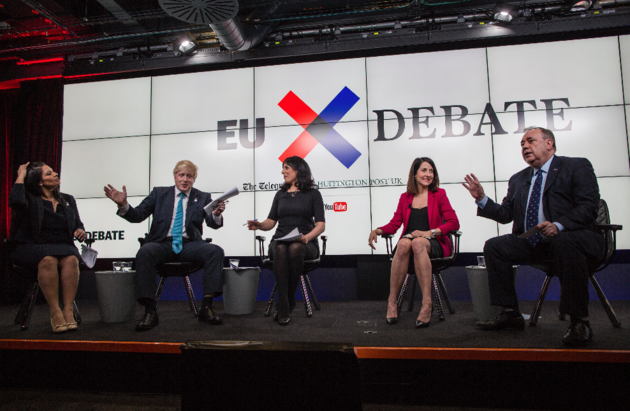 Last night I went to the Telegraph and Huffington Post’s EU debate at Google’s HQ in central London.

Filled mainly by Huffington Post bloggers, it was a Remain-leaning affair. But that doesn’t mean we didn’t learn anything.

Here’s some of the main things I took away from it:

Part of the reason young people have been so switched off from this debate is because it has completely ignored the interests of many young people.

What was refreshing about the almost entirely young audience was that they asked questions about issues the two main campaigns have barely discussed.

One of those is climate change – something which has received scarcely a mention apart from Green quarters and the much-ignored calls of some huge environmental charities such as Greenpeace, the RSPB, Friends of the Earth and others.

It soon broke into a two-minute shouting match between Boris Johnson and Alex Salmond about bananas. I’m not joking – I wish I was.

I actually shouted ‘Stop talking about bananas and start talking about climate change’, but to no avail (despite several ‘hear hears’).

Another issue raised tonight: ‘What impact will Brexit have on houses and getting on the ladder?’ The extent to which this has been raised in the campaign? Osborne saying that house prices would fall by 18 per cent in the event of a Leave vote. Way to galvanise the youth vote, George.

Something refreshing happened last night. The Remain representatives, Alex Salmond and Liz Kendall, both mounted a passionate defence of immigrants.

It’s the first time I’ve seen it in this debate so far. Kendall said the debate has ‘talked about immigrations as if it’s a disease’, while Salmond challenged Johnson on his claim that ‘We all like immigrants’.

‘I wish that were true…I’m fed up with immigration being treated as a negative’ Salmond responded.

It was uplifting to see – particularly as immigration has become the most popular search topic when it comes to the EU referendum. Remainers have to have a positive answer.

Despite repeated challenging, neither Priti Patel nor Boris Johnson would say what regulations currently ‘holding the UK back’ they would like to scrap.

‘You call it red tape, I call if maternity leave, paternity leave, anti-discrimination laws’ said Liz Kendall. ‘We’re one of the least regulated countries in the G7.’

Meanwhile, Salmond hit out at Boris calling for the scrapping of the Social Chapter in 2012.

‘We’re not going to scrap workers’ rights’ retorted Patel. She still didn’t have an answer to which directives she would get rid of, though.

As a relative outsider to the official Britain Stronger in Europe campaign, Salmond could position himself as someone to be trusted.

‘For understandable reasons I don’t buy the economic Armageddon arguments’ of the Remain camp, he said – met with ‘hear, hear’ by Johnson. It made him look honest and authentic.

‘I want to hear a positive campaign. Both sides have engaged in scaremongering and negative tactics.’ Refreshing, if not entirely on message.

This is the thing with Brexiteers – they are the only ones to talk about democracy. But they so very rarely have a track record of talking about improving our very flawed democratic system at home.

At the end of the debate, I thanked Johnson for mentioning it. ‘But It would be nice if you’d also mentioned the need for PR and an elected upper chamber’, I added.

He simply mumbled: ‘an elected Lords isn’t going to happen.’ ‘Why not? It’s an unelected chamber like the Commission!’ I replied.

He didn’t respond to that.

Huffington Post’s Paul Waugh asked whether a close result would lead to one side contesting the outcome.

‘This is a once in a generation vote’, said Patel. Kendall: ‘A win is a win’. Salmond agreed – leading Boris to make a dig at how he clearly disagreed with Nicola Sturgeon on a ‘second referendum’ front.

Josiah Mortimer is a regular contributor to Left Foot Forward. You can follow him on Twitter@josiahmortimer