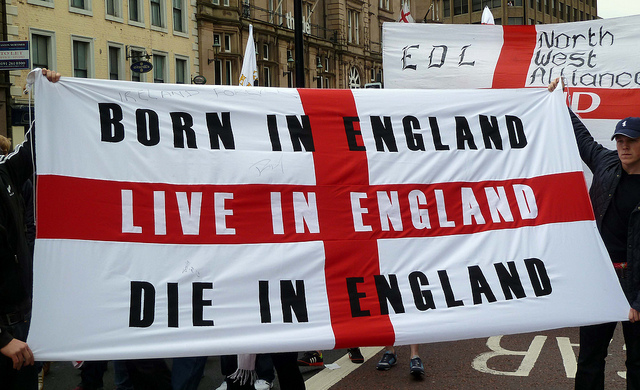 Why are so many people turning to far right politics? Angry White People: Coming face-to-face with the British far right attempts to answer this question.

An, unflinching piece of investigative journalism, Hsiao-Hung Pai’s book examines what lies at the heart of far-right movements and puts anti-Muslim and anti-immigration sentiment under a microscope.

Pai delves into some of the working class communities abandoned to economic decline; where groups like the English Defence League (EDL) seem to flourish. 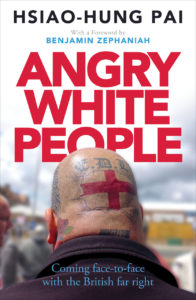 As the British National Party hurtles into obscurity, she tracks the comparative success of the EDL over a two-year period, sketching a comprehensive account of its activities and the people who keep it going.

One of the places she spends most of her time is Luton, the town once described as the EDL ‘hotbed’. While there she unearths the anti-Islam narrative drives much of the EDL’s literature.

But Pai also meets people scared and upset at the lack of opportunities for them and their children; who resent the way they were been abandoned by mainstream political parties – particularly the Labour Party.

Two big problems that come up time and again: low wages and the dearth of services for young people. These are concerns, she suggests, that often fuel disillusionment with the political elite.

But Paid also finds an unmistakable racist element in the EDL’s, and more broadly the far right’s, thinking.

One of the worries voiced by EDL supporters throughout the book is the threat of the outsider to English identity. Exactly what constitutes English, though, is unclear.

Pai manages to meet the organisation’s founder Tommy Robinson on a number of occasions; over the course of the book he ends up in prison and then leaves the toxic political movement he founded – although without abandoning his anti-Muslim views.

He is determined, for instance, that child sex abuse is ‘a Muslim problem’. To support this prejudice, he ignores widespread child sex abuse among establishment figures, many of whom were or are white Briton.

Pai questions him about the Englishness he believes he’s defending and finds someone longing for an identity that’s only really definable in opposition to an imagined, often Muslim, ‘other’.

But while spending time with former and current EDL activists, she shows that the white working classes are far from a homogenous mass.

Perhaps one of the most interesting people who feature in the book is former EDL member Darren. He explains how he came to the realisation that immigration was not the problem in British society and why he decided to leave a group that so often turned to racism.

Pai also takes a nuanced look at the people behind the anti-fascist movement. She shines a light on the gritted determination of activists who stand up to groups like the EDL.

One young woman she meets stands out – nineteen-year-old Tahsin is a British Muslim who contrary to common misconceptions wears the veil as an act of rebellion. This directly challenges the narrative peddled by politicians like David Cameron that all Muslim women are oppressed and in need of saving.

Pai makes the space for Tahsin to speak for herself; identities so often portrayed as flat become three-dimensional.

But if Angry White People is a portrait of the British far right, it’s also a clear comment on mainstream politics.

One of the take-home messages of this book is the success of the far-right’s racist message beyond its own movement: aspects of anti-immigration and Islamophobic sentiment have been folded into contemporary political discourse.

Indeed, many EDL supporters use their vote to back UKIP, a party that not only reflects many of sentiments voiced by the far-right but push the political conversation onto xenophobic ground.

At a time when far-right politics are sweeping across Europe and beyond, this book provides an important insight into not only the likely driving forces behind such movements but also the effect they have on the mainstream.

Maya Goodfellow writes for Media Diversified, The Independent and LabourList.

13 Responses to “Who are Britain’s ‘Angry White People’?”