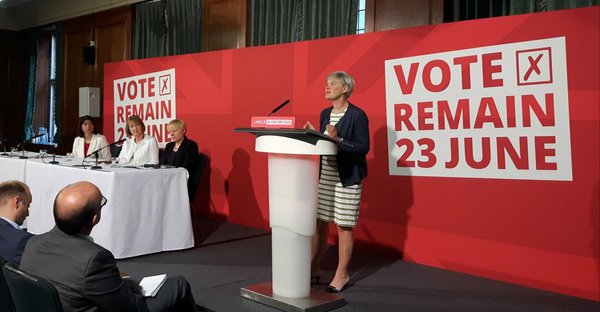 Labour is calling for women’s voices to play a greater role in the EU referendum campaign, as new research from Loughborough University shows that just 16 per cent of TV appearances related to the EU referendum have been by women, and that the ten most prominent voices in the campaign are all male.

Harriet Harman, Angela Eagle, Seema Malhotra and Kate Green spoke in Westminster this morning, highlighting the many ways in which EU membership has benefited women in the UK, and criticising the imbalance of representation on both sides of the campaign.

“Half the population of this country are women and our membership of the EU is important to women’s lives,’ Harman commented. ‘Yet men are – as usual – pushing women out. Women are being excluded and the debate narrowed.”

The event coincides with the publication of a TUC report detailing how the EU has enhanced the rights of women workers.

Eagle, shadow secretary for business, and Green, shadow minister for women and equalities, both challenged the Leave campaign to make clear which EU regulations protecting women workers they were willing to scrap.

‘You can’t have it both ways,’ Eagle commented, referring to the Leave campaign’s repeated failure to clarify  how its war against ‘Brussels bureaucracy’ and ‘red tape’ would affect workers protections.

Green also pointed to the important role that EU advocacy and funding plays in advancing women’s safety and independence around the world.

Later this evening, party leader Jeremy Corbyn will echo the call for more female voices in the debate.

Yesterday, Scottish First Minister Nicola Sturgeon, Plaid Cymru leader Leanne Wood and Green Party MP Caroline Lucas appeared together, calling on those ‘who share progressive values, believe in the protection of human and social rights and support equality to back membership of the EU in the referendum next month.’

They also acknowledged Europe’s role in empowering women, arguing that ‘from maternity and paternity leave for parents, work place rights during pregnancy, to rules protecting against harassment and unequal treatment, women in Britain benefit from the EU.’

Harman has written to Ofcom, suggesting that it is failing in its responsibility to represent ‘an appropriately wide range of significant views’.