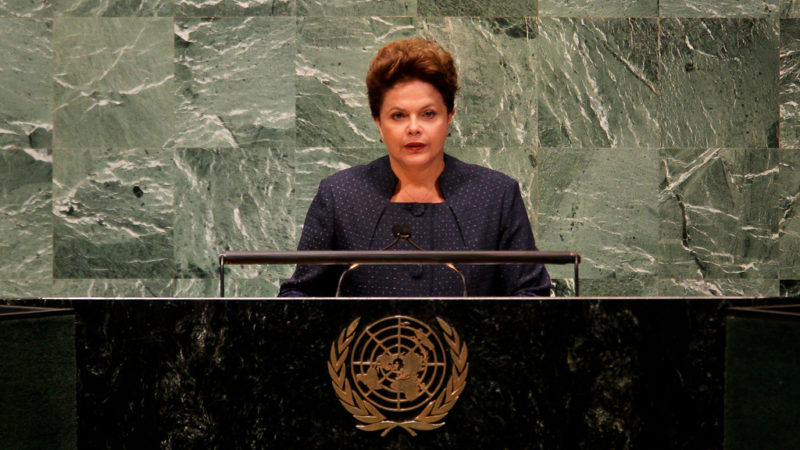 The recent coup against Brazilian president Dilma Rousseff is extraordinary and has received relatively little attention in the British media.

The startling fact is that, while more than 50 million Brazilians voted to re-elect Dilma Rousseff as their president in 2014, it took only 55 senators to take the decision to remove her.

So they have suspended her for 180 days in order to make her face an impeachment trial over accusations of budget manipulations. The situation is a complete negation of democracy.

Ernesto Samper, General Secretary of the Union of South American Nations, has said that Dilma Rousseff remained ‘the legitimate leader’ of Brazil and retains her ‘democratic legitimacy,’ adding that the decision to initiate an impeachment trial against her was ‘compromising the democratic governability of the region in a dangerous way.’

Responding to the fact that the impeachment effort against the ousted Brazilian president is based on allegations that she manipulated budget accounts, Samper warned that it set a dangerous precedent by criminalizing what he sees (rightly or wrongly) standard government budget management practices.

Brazil’s trade unions, Workers Party (PT) and social movements have simply labelled it a coup, and in Latin America itself, only Argentina’s right-wing government has publicly supported the new right-wing administration.

However, the global outcry has been less than what might have expected.

With Dilma gone, vice-president Michael Temer has become president. If the impeachment succeeds, Temer will be installed permanently for the remainder of the presidential term.

Polls have shown Temer has little support among voters, with two percent saying they would vote for him in 2018. Interestingly Dilma Rousseff’s most vocal defender – and former president – Lula has support from over 20 percent of the electorate.

In less than a week, the nature of the new Government was quickly exposed as one of hardline neo-liberalism – an agenda clearly contrary to the will of Brazilians when they re-elected Rousseff.

Nearly immediately, they announced that they intend to fire at least 4,000 public workers and it has been reported that ministers have to review the pay rolls of their ministries in order to seek to cut 25 per cent of workers.

Meanwhile, new health minister, Ricardo Barros, said the size of Brazil’s highly popular public health program must be reviewed, even though universal access to health care is constitutionally guaranteed, and this is within a context of the ongoing public health challenges posed by the Zika outbreak.

The Ministry of Racial Equality was abolished on the 128th anniversary of the abolition of slavery in Brazil.

In an incredibly diverse country, the new cabinet has no women, no Black ministers, or no one who identifies as gay, lesbian, or trangender. As Brazilian Senator Cristovam Buarque, who voted in favour of Rousseff’s impeachment, tweeted: ‘Seems strange to me a cabinet without women, without representatives from minority groups or social movements.’

Rousseff herself responded by saying that now ‘inequality has a clear face in Brazil. It’s the face of women, black people, the poor, and the youth.’

Why does this matter to those of us interested in democracy and international development here in Europe? Not only because we should support democracy throughout the world, but also because of what Brazil has achieved in recent years in terms of social inclusion.

At the start of the millennium, about a third of Brazil’s population languished beneath the international poverty line ($2 a day), and about 15 per cent was living on less than $1.25 a day.

Yet, since the Workers Party has been in power — with Lula (2003-2011) and then Rousseff — according to Brazil’s Institute of Applied Economic Research (IPEA), between 2004-2014 the country has reduced poverty by 63 percent.

As an article in Foreign Affairs in 2014 noted:

“In the first decade of the new century, some 40 million Brazilians moved from poverty into the middle class, per capita household income shot up by 27 percent, and inequality dropped dramatically—unlike in every other BRIC country (Russia, India, and China), where it rose. Today, Brazil still faces many challenges, from an economic downturn to corruption scandals to the end of the commodity boom. But the country’s incredible success in reducing poverty and inequality can and should light the way for further progress, both there and abroad.”

The Fome Zero (Zero Hunger) programme has featured more than 40 different programs run by close to 20 government ministries. The most significant of these Bolsa Família (Family Grant) saw Brazil put combating poverty and inequality centre stage, giving families small but life-changing amounts of cash in return for having their children vaccinated and being in school.

Not only did Bolsa Família reach more than a quarter of the population (and 85 per cent of the poor), but the payments, tiny though they are, doubled the incomes of Brazil’s most destitute families.

In its first three years, extreme poverty fell by 15 per cent, and by 2014, the percentage of Brazilians living in extreme poverty declined to less than three percent—a level the World Bank considers equivalent to eradication.

Additionally, vaccination rates reached 99 per cent, and infant mortality dropped 40 percent in a decade, with deaths from malnutrition down 58 per cent.

Of course, Brazil also faces massive challenges and difficulties but democratically elected governments, who at least have a keen focus on reducing poverty and inequality, deserve our international support.

Let’s not be silent at this vital time for the country and the region.

8 Responses to “Diane Abbott: Brazil’s coup is an assault on democracy”