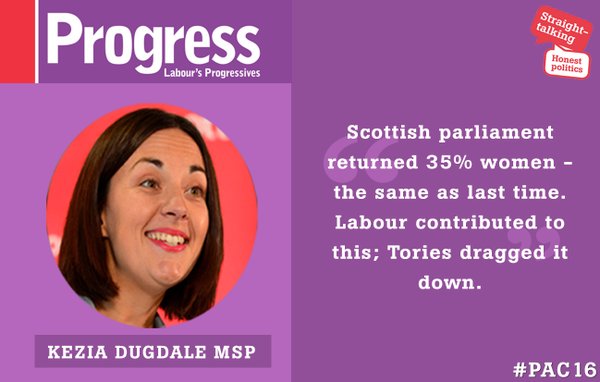 ‘Labour Leader speaking at Progress 2016 Conference‘ caused a buzz when announced yesterday. The opening session this morning was an extra bonus for attendees, as like busses, we had three Labour Leaders come along at once.

Labour must not just accommodate, but champion devolution. In Scotland that meant acknowledging the different approach to responding to the SNP.

The Scottish party had taken a vote on Trident, and whilst not Kezia’s view, it had healed some divisions in the party in Scotland. Nick said we had had to champion devolution deals in England, the left mustn’t be the conservatives in this debate.

Labour was being punished for saving the Union in Scotland, and our project was long term to rebuild trust and unmask the SNP as a centre-right Party (their only tax change was a cut of air passenger duty).

The SNP know they need to destroy Labour before they can win a referendum. Scottish Labour must show it puts Scotland first, even if whether that’s uncomfortable for national Labour.

There should be no no-go areas for Labour, and we must not retreat to our geographical or political comfort zones. We must learn from Labour wins in Exeter, Guildford, Crawley.

Alison (in best school mistressly tone) reminded us that the public cared about services like children’s centres, not esoteric internal debates which transfixed parts of the Party.

Given Councillors now are the biggest funder of the Party, the paucity of their representation in Party structures like the NEC was wrong. Scottish and Welsh Labour, English regions also under represented, let alone new bodies like elected Mayors and Police & Crime Commissioners.

The party structures need to change to reflect the changed democratic landscape said Nick, highlighting that there are more youth than local government reps on the National Policy Forum.

Uncomfortable for us, but we can’t just dismiss UKIP as nut cases and racists. They are challenging us in much of the country, Nick said. Local Councils are showing we can deliver for disillusioned voters who might otherwise listen to UKIP’s siren call.

The overall clarion call was for Labour to project a positive optimistic message to voters. We must win power, to shield our communities from Tory policies, and embrace devolution so that we can improve the communities we seek to represent.

Many of us were on the ‘red eye’ trains to get down to London for this opening seminar. This was an upbeat, refreshingly northern and Scottish, session which didn’t disappoint.