Following talks with Plaid Cymru, Labour will proceed with 'caution and humility' 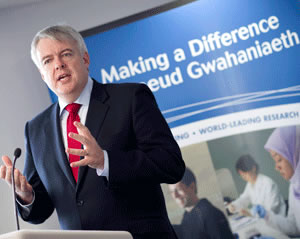 After a week of drama, Welsh Labour Leader, Carwyn Jones, has been confirmed as the Welsh Assembly’s nominee for First Minister.

His nomination came after last week’s vote, which saw Jones and Plaid Cymru Leader, Leanne Wood, tied on 29 votes each as UKIP and Conservative AM’s backed Wood in a move designed to send Labour a message.

With Labour having secured 29 of the 60 seats in the Assembly in elections held just a few weeks ago, Wood today attacked what she perceived as Labour’s arrogance at having steamed ahead with a vote to nominate a First Minister rather than providing more time for talks between the parties.

She told the Assembly earlier this afternoon that her decision not to re-stand for First Minister this time was a ‘one-off vote’ to allow Jones’ nomination.

Responding to his nomination, the First Minister pledged not to bring forward any legislation within the first 100 days to enable parties ‘to jointly develop a scrutiny and committee procedure that is better suited to this institution’s parliamentary responsibilities.’

Noting that by not giving Labour an outright majority the people of Wales wanted it to move forward with ‘caution and humility’, he told AMs that his Government’s priorities would reflect ‘the successful result for Welsh Labour in the May election, and subsequent discussions with the main opposition party, Plaid Cymru.’

He identified as a priority a ‘relentless focus on securing a successful and sustainable future for our steel industry’ and pledged to ‘campaign vociferously for a Remain vote’ in the EU referendum next month.

After 100 days, the government will bring forward a new Public Health Bill, an Additional Learning Needs Bill, and will, Jones said, ‘take forward, on a cross-party basis, legislation that will remove the defence of reasonable chastisement’ and ‘seek to amend the current Welsh language measure.’

Outlining the basis upon which Plaid and Labour had reached a deal, a joint statement from the parties today reads:

“The basis of the agreement reached, a Compact to Move Wales Forward, is the establishment of three liaison committees – on Finance, Legislation and the Constitution.

“This will allow formalised joint working on future priorities. However, this does not constitute a coalition, or a formal confidence and supply arrangement and both parties reserve the right to respectfully agree to disagree.”

Meanwhile, UKIP’s Leader in the Assembly, Neil Hamilton has been accused of being ‘blatantly sexist’ by Welsh Lib Dem AM, Kirsty Williams, after he called her and Leanne Wood as “political concubines” for doing deals to ensure Jones’ continuation as First Minister.