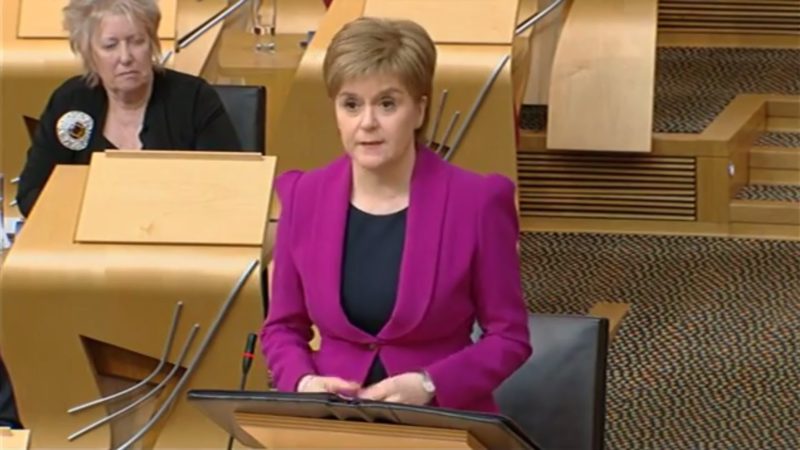 Nicola Sturgeon has a ‘tough decision’ to make over Scotland’s future if the UK votes to leave the European Union, according to one of the country’s leading pollsters.

To date the SNP have remained adamant that if the UK voted to leave the EU against the will of the Scottish people it would more likely than not trigger a second referendum on independence.

However, according to new polling by Panelbase for Heart FM and the Sunday Times, Brexit would see support for Scottish independence increase only slightly from 47 per cent to 50 per cent.  This is down from the 52 per cent who in January said they would support independence if the UK voted to leave the EU.

SNP sources were last week quoted as saying that support for independence would have to have reached at least 60 per cent for a year before a second vote on Scotland’s constitutional future took place.

The Panelbase polling finds that 63 per cent of Scots support staying in the European Union, a considerably larger proportion than England. Just 37 per cent support withdrawal.

Professor John Curtice of Strathclyde University told Sunday Times that ‘although Scotland apparently remains determined to vote by nearly two to one in favour of remaining in the EU, this does not mean that a UK-wide vote to leave would necessarily clear the way for Nicola Sturgeon to hold and win a second independence referendum.’

However, Nicola Sturgeon herself, speaking to the BBC’s Sunday Politics Show for Scotland yesterday, insisted it would be a ‘democratic outrage’ if Scotland were ‘dragged out of Europe against our will’. She maintained that it would lead to an ‘overwhelming demand’ for a fresh referendum.

Appearing on the same programme, Scottish Labour Leader, Kezia Dugdale, sought to undo some of the damage caused during her recent interview with the Fabian Review in which she suggested she might be supportive of independence if it was the only way to stay in the EU.

‘I was very proud to vote No, and I would do so again,’ she said.

Interestingly however Dugdale did not want to be drawn on whether Labour MSPs would be free to vote how they want if a second independence referendum did take place.