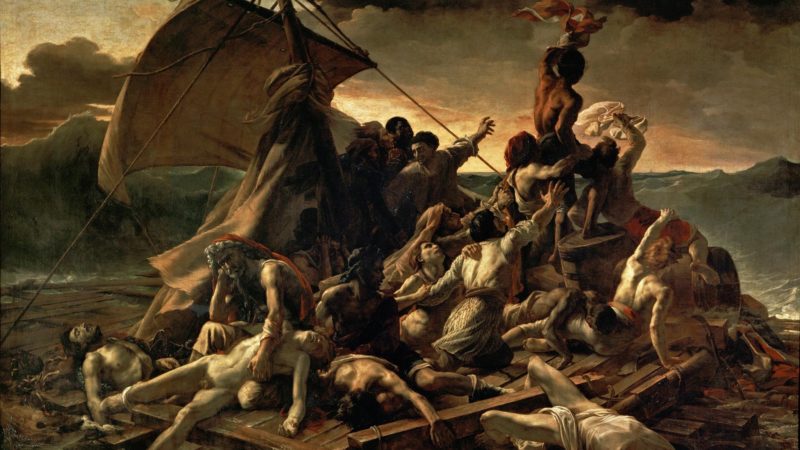 The Raft of Medusa (1819) by Théodore Géricault

What is the link between the government’s welfare reforms and its response to the migrant crisis in the Mediterranean?

At first the two appear quite distinct. Indeed, they are often played against one another, with the idea of migrants coming to slurp up the nation’s welfare budget forming a central plank in the prime minister’s EU referendum campaign.

Hailing his deal with Brussels in December, David Cameron said curbing benefits for EU migrants in the UK would reduce the ‘pull factors’ drawing people into Britain.

This ‘magnet theory’ of migration reared its head again today in a report on the EU’s scrapping of the Italian-led search and rescue operation Mare Nostrum, and replacing it with the scaled-back Operation Triton, (so called presumably because ‘Operation Poseidon’ would have sounded too menacing).

The report by British universities found that EU policymakers decided Mare Nostrum was a ‘pull factor’ encouraging migrants to climb into small boats and set sail for Europe. If this magnet was removed, the theory went, the number of people crossing the seas would decrease.

The switch to Triton, run by the EU’s border controls agency Frontex, in 2014 effectively downsized search and rescue operations, partly to save money. As the Guardian puts it, Triton comprises ‘one helicopter, one aircraft, and nine vessels, has no search-and-rescue mandate, and merely patrols Italian territorial waters’.

But the results of this deterrent approach present real problems for the ‘magnet theorists’.

Having analysed Frontex data, the universities report that while the number of migrants crossing the Med in the first four months of 2014 and 2015 was unchanged at around 26,000, death rates soared from 60 to 1,687 — a 30-fold increase.

Charles Heller, a co-author of the report at Goldsmiths University, went as far as to call the downsized policy one of killing by neglect. And things show little sign of improvement. Over the weekend, a fishing boat full of migrants capsized in the Mediterranean, with the number of deaths estimated between 700 and 950. Oxfam said on Saturday 10,000 people have tried to cross from Libya to Italy in March alone.

Meanwhile, the evidence for welfare being a ‘pull factor’ for migrants to come to the UK is practically non-existent. For one thing, non-EU migrants are not even able to claim out-of-work benefits in the UK. Migrants from the EU are less likely to be on benefits than the rest of the population, and ‘availability of jobs’ is the main attraction for migrants, according to the Migration Observatory.

When Tory peer Lord Freud was recently asked for some concrete evidence of a benefits ‘pull factor’, his answer was decidedly iffy.

Yet the prime minister’s response today to the latest mass drowning in the Med suggests he remains as committed as ever to a deterrent approach to the migrant crisis:

“We should put the blame squarely with the criminal human traffickers […]

You have got to deal with the instability in the countries concerned, you have got to go after the human traffickers and the criminals that are running this trade.

You have got to make sure, yes there is an element of search and rescue, but that can only be one part of this.”

His relegating search and rescue to an afterthought is of a piece with government policy, which went from withdrawing completely from rescue operations in 2014, to later providing one ship, which doesn’t appear to be actually doing anything.

Further, blaming the ‘criminal traffickers’ puts the focus on the supply of escape routes, rather than the growing demand for a way out of warzones like Libya and Syria. This ‘push factor’ is the primary cause of the crisis, and won’t be resolved by aid money and arresting smugglers.

And here’s where migration policy lines up with wefare reform. Just as the Iain Duncan Smiths of the world see poverty as a matter of bad behaviour, the architects of Operation Triton believe migration from war, tyranny and deprivation is somehow a choice.

And just as our government believes scrapping state protections and punitive sanctions will encourage thrift and hard work, the ‘magnet theorists’ believe a downsized search and rescue operation will deter the as yet undrowned – leaving desperate people to either sink or swim.