The conviction of a young woman from Belfast for taking abortion pills reinforces the need for safe, legal abortion provision in Northern Ireland 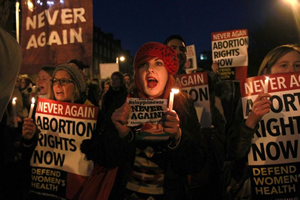 For some, it is shocking to realize that the 1967 Abortion Act does not apply in Northern Ireland.

For those who have watched the issue closely and lobbied for its extension, the decision of the last Labour Government not to extend the 1967 Act before the transfer of powers to the NI Assembly was at best a deep disappointment.

Harriet Harman scuppered Diane Abbot’s initiative by persuading Emily Thornberry that abortion rights had to be sacrificed in the interests of the Peace Process.

As a sovereign state, the UK Government is responsible for upholding the reproductive rights of women in all of the UK under the internationally agreed program of action developed at the UN’s International Conference on Population and Development in 1994.

Yet the UK Government makes no response to the denial of these rights in Nothern Ireland, other than reiterating that this justice issue is a ‘devolved matter’ over which it has no control.

As Goretti Horgan, a member of NI’s Alliance for Choice, told a meeting organized by BPAS, other devolved matters, such as welfare reforms, have not been regarded as untouchable by the UK Government, yet this is the Northern Ireland Office’s standard reply to calls for reform.

It is also the reply given by Jeremy Hunt to the argument that that those who travel from NI to Britain for abortions should at least be able to access National Health Services provision without charge. A case on this issue is winding its way to the Supreme Court this year.

‘Health is a devolved matter’, Hunt told us when we went to visit his Surrey surgery a year ago.

The London- based group Abortion Support, which raises funds and offers Irish women traveling to the UK both financial and practical advice, estimates that people travelling from what remains one of the poorest regions in the UK must pay fees as a private patient that cost between £500 and £2,000 depending on length of gestation.

Of course, needing to travel often creates delays that push women from NI into the later pregnancy period as they try to find the necessary cash. On top of that there is the cost of travel and overnight accommodation. The additional time needed for travel often means additional time off work or that childcare needs to be arranged, all of which adds further to the costs.

It is often a combination of such costs that leads women in NI to committing the criminal offence of obtaining WHO (World Health Organisation) approved abortion pills over the internet in the early stages of pregnancy and self medicating. When, last week, a young woman was given a suspended prison sentence for such an offence there was little surprise but a great deal of anger.

The anger was further fuelled by the knowledge that at least one other woman, the mother of a then underage girl, has been charged with a similar offence. Both cases are against vulnerable individuals, while the 200 women in NI who have signed an admission of guilt in order to progress opposition to the law in a political way have been left unquestioned by the police.

Instead, the media has a field day publishing the comments of and comments about a group of young women who shared a home over a year ago and whose reactions to events, however riveting for some, simply reveal the way that public services have deserted women in NI on the issue of abortion.

In London, we, the performance action group Speaking of I.M.E.L.D.A.  (Ireland Making England the Legal Destination for Abortion) focused on the fact that — and in the words of our protagonist in our short film — a British passport is ‘neither use nor ornament’ to Northern Irish residents seeking equal access with women in other parts of Britain to reproductive services.

We visited the Passport Office and the Northern Ireland Office, where nobody was available to answer our question as to why the British passport of our Northern Ireland citizen was not a passport to equal services.

There have been protests in the past few days in Norther Ireland, in London, in Berlin and elsewhere. Amnesty International has an online petition to stop the criminalistation of women and girls in Northern Ireland and to bring Northern Irish abortion laws into line with those in Britain.

Commentators in Northern Ireland have pointed to the fact that opinion polls show a majority in favour of provision of local access to abortion, but expect that members of the Northern Irish Assembly will wait till after the May election before taking any steps to improve the situation.

Of course abortion is not the only issue on which the UK government has ignored the needs of women in Nothern Ireland. Despite requests from all parties in Northern Ireland and the Republic and of recommendations by international bodies to do so, the UK Government also refuses to apply Resolution 1325, which establishes the duty of resourcing gender sensitive post-conflict work, to Northern Ireland.

The reason given by the UK Government on this matter is that what happened in Northern Ireland was ‘not a conflict’.

Try telling that to anyone who has heard the phrase Northern Ireland.

2 Responses to “Comment: Why are women in Northern Ireland still denied bodily autonomy?”