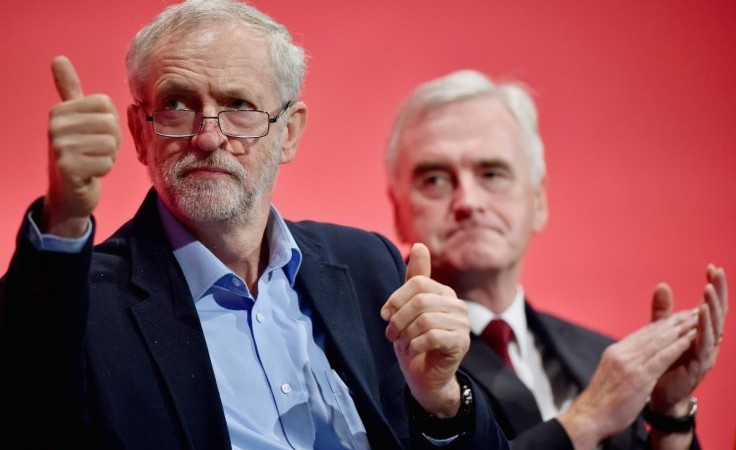 Is Jeremy Corbyn, in the words of the Daily Mail, ‘the most radical Labour leader in the party’s history’?

On Sunday, John McDonnell made it clear that the answer is anything but. Speaking on the Andrew Marr Show, he outlined Labour’s proposed response to the Port Talbot steelworks crisis: Do everything to find a buyer, with temporary nationalisation as a fallback option, as part of an active, long-term industrial policy.

These are hardly the words of a firebrand. Nor are they the words of a Michael Foot, or even a Clement Attlee. Far from reintroducing Clause Four, Labour’s policy here seems simply to be: Do whatever works.

By contrast, the Prime Minister and Business Secretary have ruled out a whole raft of options, on purely ideological grounds. Even temporary nationalisation will not do; neither will a rise in EU tariffs, designed to counter Chinese state subsidies; and the idea of an active industrial policy remains complete anathema.

In putting public ownership back on the menu of policy options, Labour have hardly veered to the left. Instead, this is a return to the supremely moderate idea of the mixed economy — public ownership of natural monopolies and an active industrial policy to compensate for market failures.

These ideas were not only mainstream in the period after 1945. They continue to underpin the success of dynamic economies like Germany, South Korea and Taiwan.

If the mixed economy seems radical, it is only because we have for decades been told that it failed, and that there is no alternative to minimal state involvement in the economy, maximal privatisation and deregulation.

This ideology was developed by an extremist school of economists who were largely ignored until the 1973 oil crisis, which sparked a turn to radical economic liberalism as governments worldwide struggled to cope with the fallout.

Packaged as the Washington Consensus, radical privatisation, deregulation, financial and trade liberalisation were rolled out across the world through the eighties and nineties, in one of the greatest social experiments since the Second World War.

As economist Dani Rodrik has shown, this experiment was a resounding failure. The countries which went furthest in implementing Washington Consensus policies, principally in Latin America, experienced mediocre performance at best.

Meanwhile, the great economic miracles of the last thirty years—including the newly industrialised countries of East Asia, with the sole exception of Hong Kong—were all countries which dared to defy the Washington Consensus, and stimulate growth through an active industrial policy and a prudent combination of state-backed incentives for investment and public ownership of infrastructure and other natural monopolies.

If the record of the last thirty years were not enough to discredit the Washington Consensus, the 2008 financial crisis put the final nail in the coffin of financial liberalisation and deregulation. It is now clear that these extremist policies not only stifle growth, they also promote instability.

Britain was particularly vulnerable to the 2008 crisis because of the extent to which the UK economy has become dependent on financial services. According to Washington Consensus dogma, this dependence is unproblematic.

Britain’s comparative advantage lies in financial services, so the logic goes. Why shouldn’t the British economy therefore specialise in what it does best? The economic models dictate that we must not diversify the economy, even if it would provide employment to millions. The most efficient solution is instead to tax financial services, and redistribute the proceeds in the form of benefits to everyone else.

This logic, absorbed wholesale from microeconomics textbooks of the 1990s, underpinned the Blair era deindustrialisation of Britain and the birth of modern welfare dependency.

If the devastating social consequences of these policies were not enough, 2008 finally confirmed their perversity. Britain’s comparative advantage has transformed it into a monocrop economy, as dependent on financial services as Madagascar is on vanilla.

And just as the Madagascan economy crashed in 1985 when Coca-Cola removed vanilla from their recipe, Britain in 2008 took a particularly devastating blow from the global financial crisis. With nearly all its eggs balanced precariously in one basket, the economy which gave the world the industrial revolution is today more fragile and vulnerable than ever.

Why, then, not break from the dogma, and introduce an active industrial policy, aimed at diversifying the economy for the first time in decades? The world is replete with working examples of such policies, not only in East Asia, but closer to home, in Germany and other European economies which have remained industrial powers, even in the age of globalisation.

Such a policy should be welcomed by businesses in every sector, including financial services, as a more diverse economy would be a more stable economy. Business has every reason to welcome a more pragmatic role for public and mixed ownership in the economy.

Public ownership of railways and utilities, as well as a return to large-scale public investment in housing, can drive a decrease in the cost of living, as it has done in other European and Asian countries. A lower cost of living would mean British labour would be more competitive, creating a far more hospitable environment for inward investment.

Now is the time for a return to pragmatism, after decades of stultifying dogma. British business, and the British people, deserve an economic model which responds to the world we live in, rather than the idealised world of perfect markets dreamt up by 1970s economists.

The Business Secretary and the Prime Minister have made clear that the Conservatives cannot and will not deliver this fresh thinking. They are still under the spell of a discredited ideology which has failed everywhere it has been implemented.

The Labour party, on the other hand, are now the party of pragmatists. Not only in Port Talbot, but across the country, it is time to open the door to fresh ideas. Only Labour stand ready to open that door.

6 Responses to “Comment: Labour is now the party of pragmatists”