The Housing Bill will further inflame an already desperate situation 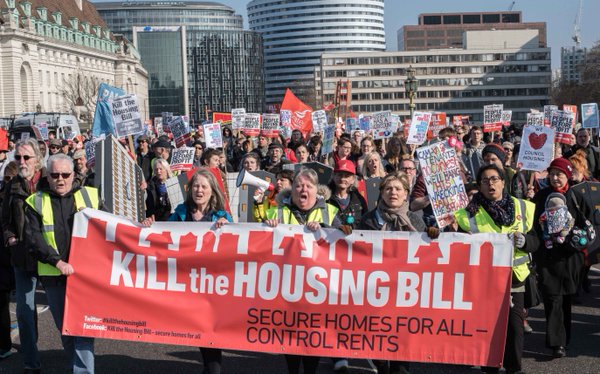 I’m in the main office of a London council: open plan, bustling, fractious even. I’m there as an advocate for Donna (not her real name), waiting for an appointment with the Homeless Persons Unit here.

Donna has been released from prison that morning, she has seven black holdalls with her, containing her worldly possessions, and nowhere to sleep that night. The stakes feel pretty high. After three hours we are finally seen by a worker at a central pod, with small screens for ‘privacy’.

Questions include ‘Have you been a victim of domestic violence?’ and ‘Are you involved in or at risk of sex work?’ all asked in full view, to be overheard by whoever might be passing by.

Donna is getting understandably anxious and upset. The council housing worker is saying it’s very unlikely they’ll house her today, they’ll need to do further investigations. Donna says ‘what about my mental health? I’ve got anxiety and depression.’ Worker: ‘You’re expecting to be housing priority need because of a condition that a quarter of the population has?’

Donna repeats that she was also a victim of domestic abuse and so they have to house her as someone fleeing domestic violence. She becomes more distressed and begins to pull down her trousers to show the worker the stab wounds on her thighs from her former partner. Donna begins raising her voice.

I request to see the housing worker’s manager. I’m refused. Donna breaks down in tears, stating ‘I can’t believe this, I’m having such a bad day.’

We are there all day. I quote all the relevant bits of legislation I can think of at the council. A colleague rings half of London to find a bed for the night, even though this council should clearly accept her application.

Donna ends up in a Travelodge for the night and has an appointment first thing the next morning with a housing charity, but nothing from the council.

I wish this was an unusual story. Everyone I know in the sector has housing nightmare stories, lots of them: homeless persons units across London stretched to breaking point, turning away the most vulnerable and the most in need of accommodation, as central government cuts and the austerity agenda rolls on.

Internal prison housing staff were always relieved when the cold weather night shelters opened – they provide much needed emergency accommodation. The situation has gotten progressively worse under the coalition and this government.

London undoubtedly has a fully-fledged housing crisis. Rough sleeping has risen by 30 per cent in the last year.

The pernicious Housing Bill looks set to make all this far worse. As yesterday’s march and the Kill the Bill campaign point out, it will destroy council housing, condemning millions to a lifetime of insecure, expensive private renting.

It seems like the opposite of what a sensible, progressive government should be doing at a time like this. This afternoon sees the first Communities and Local Government Select Committee evidence session, as part of its Homelessness Inquiry. It’ll be hearing from housing charities as to their work, the causes of homelessness and the effectiveness of work undertaken to tackle it.

Surely, while the brilliant work of organisations like St Mungo’s, Crisis and Thamesreach is consistently undermined by a government whose legislation exacerbates homelessness, their expertise is only going to be rearranging deck chairs on the Titanic?

I recently visited a pioneering arts and health project in a wet hostel (that is, one where you can drink) in Lambeth. They have five years of funding meaning they can take a user-led, relational approach to enable a clear list of health outcomes.

Is this funded by the Department of Health, enamoured as they are with social prescribing? No, it’s funded by a large grant giving foundation and delivered by an organisation with charitable status.

It’s all too obvious too, that over-stretched, beleaguered charities are going to be the ones left to pick up the pieces of people’s lives following the reduction by £30 a week of the Employment Support Allowance and the forthcoming budget announcement on the changes to the Personal Independence Payment. Both policies will increase the risk of homelessness for those with disabilities.

Alongside ramping up the already long list of those at risk of homelessness, there is no clear plan for London’s housing crisis. Thankfully, Labour’s London mayoral candidate Sadiq Khan is tackling this issue head on with a whole suite of policies to enable the u-turn on housing that is needed, so that ordinary Londoners, vulnerable Londoners, every Londoner can access the basics: food, water, shelter.

The reality is that desperate. As I walked from the tube to the shop – a two minute walk – last Thursday, I was stopped four times and asked for money. Until a few years ago, you seldom saw someone begging, I don’t think people felt it a worthwhile area to target.

There are savvy organisations working with those with multiple disadvantage, like Resolving Chaos – people who understand the complexities of homelessness. Government and local authorities would be wise to heed their work and halt this human tragedy.

James (not his real name) begs in my area. He and his partner sleep in a doorway, because they can’t find a hostel that will let them stay as a couple, together. His partner doesn’t want to be separated from him because she was raped in the last hostel she was in alone.

As a society and as those who care about equality and justice, we have to listen to experts by experience and those who work with them to provide lasting, useful answers for the Donnas, the Jameses and everyone affected by the shocking policy that is fuelling the housing crisis.

Sara Hyde is Vice Chair of Fabian Women’s Network and is a candidate in the London Assembly elections in May. Find her on Twitter @sarakhyde