Since day one, Assad has sought to eliminate any decent alternative to himself 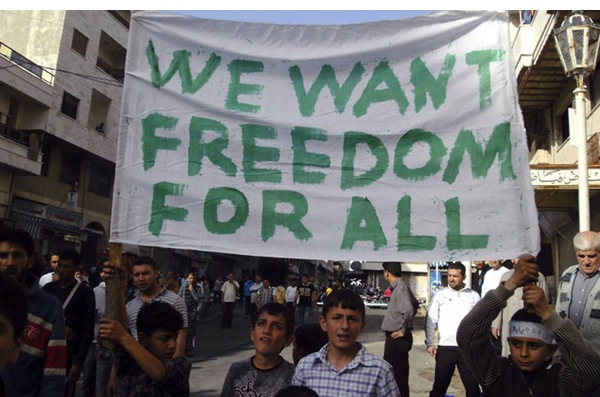 Five years ago today protests broke out in a small town in southern Syria and, carried by social media, spread throughout the country.

For about six months, the Syrian uprising would be mostly peaceful, but inevitably the population fought back as the regime of Bashar al-Assad—aided from the earliest stages by Iran and its Lebanese proxy, Hizballah—widened and intensified its violent crackdown.

In yet another unexpected turn, the last few weeks have seen the revival of this early spirit of the revolution to its strongest point in years.

The protests that began in Deraa on March 15, 2011, were the beginning of the organized protest movement that began the Syrian uprising, but they were not the first demonstrations in Syria.

A month before, in Damascus, on February 17, a spontaneous crowd stopped security forces beating up a young man at a market and began chanting: ‘The Syrian people will not be humiliated.’ The event was recorded and the video made its way around Syria.

Before that, on January 26, a Kurd named Hasan Ali Akleh, inspired by the incident that began the “Arab Spring,” immolated himself in north-eastern Syria.

To defeat the opposition, the Assad regime not only tried to militarily suppress it but to politically discredit it. Assad said the uprising was a sectarian, Islamist conspiracy of terrorists. With the help of Russia and Iran, this message was carried around the world. Assad then tried to make it so.

By 2011, Assad had been using the antecedents of the Islamic State (ISIS) as part of his foreign policy for nine years. Before the U.S. invasion of Iraq, Assad helped ISIS’s founder, Ahmed al-Khalaylah, better known as Abu Musab az-Zarqawi, set up the networks that would supply ISIS with foreign fighters.

ISIS volunteers landed at Damascus International Airport before being taken to safe-houses and training camps overseen by Syrian military-intelligence, headed by Assad’s brother-in-law, Assef Shawkwat. ISIS’s foreign fighters then moved over the border to Iraq, and those who didn’t become suicide bombers could move back into Syria for medical treatment and other logistical support if needed.

Recent court cases in the United States have presented the evidence of Assad’s criminal liability for ISIS beheading two Americans in 2004 (Owen “Jack” Armstrong and Jack Hensley) and for ISIS’s bombing of the hotels in Jordan in November 2005.

In 2007, as the tide turned in Iraq, some of the jihadis Assad had set loose began flowing into Syria; some of them were diverted into Lebanon, where they started a small war to destabilize a government that had recently won its independence from Syrian occupation, and some were arrested. But this was not the end of Assad’s collaboration with ISIS.

In August 2009, the second deadliest bombing of the Iraq War rocked Baghdad, striking government institutions, not Western soldiers. The planning for the attack, as is now known because Iraqi intelligence had somebody wearing a wire in the room, had taken place in Zabadani, north-east of Damascus, where agents of the Assad regime, ISIS, and the fallen Iraqi Ba’ath regime met directly.

It might, then, appear that ISIS’s involvement in the anti-Assad effort since 2011 was ‘blowback,’ which it is, but this is willed blowback.

Just eleven days after the Deraa protests, Assad released hundreds of violent jihadists and Islamists. There were further “amnesties” in May and June 2011. Among those freed was Amr al-Absi, who was crucial in the formation of ISIS’s caliphate. This was at the same time the regime was deliberately murdering peaceful, secular activists like Ibrahim Qashoush and Ghiath Matar.

Between early 2012 and early 2013, the regime perpetrated a series of massacres— Houla, Qubair, Tremseh, Daraya, Thiabiya, Barzeh, Haswiya, Bayda, and Baniyas—in a deliberately sectarian way, targeting Sunni villages and towns using Alawite militiamen. Mosques were sacked and alcohol left in them. Sunni children were tortured into declaring Assad a god. And videos of these horrors were disseminated widely—and deliberately—by the regime to stoke sectarian tensions.

Assad was quite prepared to see his own Alawi community and other minorities killed by jihadi-Salafists. As one regime defector explained: ‘The regime accept[ed] the killing by [jihadist] groups of Alawis and Druze in order to use that to convince these minorities to rally around the regime and hold on to it.’

Syria’s energy sector is effectively a joint enterprise between Assad and ISIS, with Russia providing the middle men and technicians, giving ISIS access to millions and millions of pounds that other insurgent groups do not have—something for which members of the Assad regime have been sanctioned.

In addition to directly empowering ISIS, Assad has run a war that has pushed people to seek shelter from ISIS. The regime has waged a campaign of extermination against the Syrian people, by the United Nations’ own definition, and matched ISIS atrocity-for-atrocity, whether it’s the systematic use of rape and sexual violence or burning people alive.

By the end of 2012, Assad had already shelled whole cities to ruin with artillery, begun to drop barrel bombs from helicopters, launched airstrikes against densely-populated urban areas, fired Scud missiles (designed for inter-State warfare) against civilian zones in Syria, and resorted to chemical weapons of mass destruction.

None of these methods of warfare have ceased.

Still, the regime has not celebrated its atrocities on glossy videos, which apparently means its atrocities don’t count in the same way as ISIS’s and means people are unashamed of suggesting an alliance with Assad.

‘Pictures or it didn’t happen’ is now a principle of international diplomacy, too, it seems.

Assad empowering the extremists in the insurgency might seem counter-intuitive, but Assad saw clearly from day one that doing so might save him. Assad sought to eliminate any decent alternative to himself and face the Syrian population and the world with a binary choice: the dictator or the terrorists.

ISIS agreed that they should be the only alternative to Assad, which is why the regime and ISIS quite often attack the rebellion in tandem.

When the rebels launched a massive, second revolt against ISIS in January 2014—expelling ISIS from positions in seven provinces, clearing two entirely in six weeks—the regime bombed the rebels.

In June 2015, the regime again became ISIS’s air force during an ISIS offensive against rebels in Aleppo; this was so blatant that the U.S. State Department publicly noted what Assad was doing.

Russia took over this role with its intervention in September. Whether Russia is now withdrawing or not, the fact that Vladimir Putin can declare mission accomplished while ISIS is still in Raqqa tells you everything you need to know about what Moscow’s actual intentions were.

The ‘cessation of hostilities’ in Syria, which started on February 27, is a fiction that in design and execution has allowed Assad and Russia to continue to wage their war. There has been a reduction of hostilities, however, specifically regime/Russian airstrikes, and this has seen the re-emergence of the protest movement.

Syria’s moderate opposition has been defamed as non-existent or radicals-in-disguise, but the first chance Syrians got they reverted to the peaceful option in trying to bring down a tyranny that has destroyed a country and drowned a region in blood.

These were the people who made an impossible revolution happen and asked—as they still do—for our help.

One Response to “Five years of war: How did it get this far?”