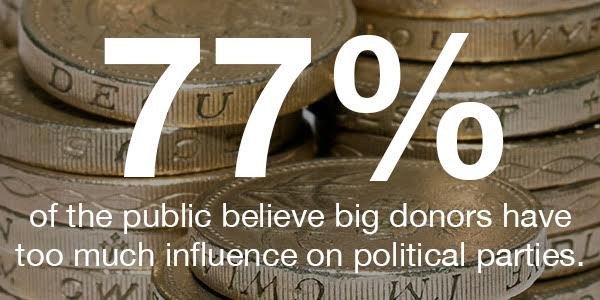 The issue of how our parties are funded is at the core of parliamentary democracy. So today’s debate in the House of Lords on the Trade Union Bill is a big one: by insisting in the bill that union members should ‘opt-in’ to unions’ political funds, the government will effectively be cutting Labour’s funding by £6m a year.

The Electoral Reform Society (ERS) can reveal today that 77 per cent of the public believes big donors have too much influence on political parties.

In fact, the Trade Union Bill could be the start of a process which sorts out our hopeless party funding system for good. The public are sick to death of the perceived influence of big donors on parties – and that includes the influence of unions on Labour as well as wealthy private individuals on the Conservatives.

A cap on individual donations is one of the measures needed for a cleaner party funding system. Under an opt-in system the money provided to Labour by unions effectively comes from many individuals rather than one ‘baron’, which should make Labour more open to a donations cap.

But we badly need a cross-party deal on party finance reform. Otherwise it simply isn’t sustainable. This stuff can’t be done in isolation against one party, or else we could see decades of unsustainable retaliations as parties get into power and attack their opponents’ source of funding.

Our polling released today also shows that 72 per cent of the public agree or strongly agree that the system of party funding is ‘corrupt and should be changed’ – up from 61 per cent when the same question was asked in 2014.

57 per cent also believe that a ‘state-funded political system would be fairer than the one we currently have’ – up from 41 per cent in 2014.

Fundamentally, campaigners such as ourselves are concerned that the Trade Union Bill is currently one-sided in its approach to reforming Labour’s funding, undermining the ‘Churchill convention’ (named after the man himself) that matters directly affecting political parties be dealt with in a multi-party manner.

But what today’s polling shows is that the public are deeply concerned with Britain’s broken party funding model. Party finances in the UK are in dire need of reform, following years of scandals and voters’ rising disgust about the role of money in our politics.

There’s growing appetite for reforming the way parties are funded, and you can see this among people from across the political spectrum. Measures in the Trade Union Bill to ensure union members have to ‘opt in’ to pay into political funds could form part of a fresh settlement.

But by targeting Labour and not tackling the issue in the round, the government is risking decades of parties indulging in tit-for-tat raids on each other’s sources of funds. We need all parties to get around the table and deal with this once and for all. Frankly, there is no other way of finding a sustainable solution and avoiding accusations of constitutional gerrymandering.

The Electoral Reform Society are calling on Peers to back the motion today to set up a cross-party committee on the Trade Union Bill, so that it can form part of a new settlement on party finances across the board.

In 2014 the ERS published ‘Deal or No Deal: How to put an end to party funding scandals’. Read the full report and recommendations here.

Josiah Mortimer is communications officer at the Electoral Reform Society