A new report describes a number of ways local governments in North America have implemented sharing economy programmes. what can the UK learn? 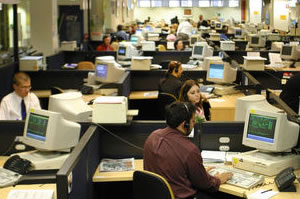 The autumn spending review announced 56% cuts to the local government grant. Alongside the heavy cuts local government faced over the last parliament, this will put services under severe pressure. Greater integration of the sharing economy could have a transformative effect.

64% of adults in the UK participate in the sharing economy, which involves the ‘bartering, sharing, renting, trading, borrowing, lending, leasing and swapping’ of ‘goods, services, time, capital, experiences and space’. The global sharing economy is predicted to be worth $335 billion by 2025, and its ability to extract value from pre-existing assets could provide savings of a trillion dollars p/a. With approximately $3.5 trillion of idle resources in the world, imaginative integration of sharing economy projects could ease the burden of local government cuts.

The report suggests sharing economy initiatives around the world that local governments could replicate to drive value, efficiency and sustainability. Local government could particularly benefit from three sectors: shared assets, space and mobility.

Shared assets programmes could ease the pressure on waste budgets. Shared space initiatives could provide affordable housing and support the surge in self-employment. Shared mobility could tackle the questions of sustainability associated with car ownership and commuting.

By contrast the UK’s assets are poorly recorded. TfL owns 5,700 acres of land with no record of its usage. The report recommends local government creates ‘an inventory of civic assets’ and ‘underutilized assets [should] be valued, inventoried and offered for use’. In doing so, local government should prioritise initiatives bringing value or social capital. Encouraging coworking spaces would help support the self-employment revolution and reduce unproductive commuting. It also gives people the power to club together and purchase as a group; Coworking Ontario offers members discounted health insurance.

Housing co-operatives could offer a partial answer to the housing crisis by providing stable accommodation for a fixed fee. They’re cheaper and sustainable. A few adults living together use 23-77% less electricity and 38-54% less gas. Local government can encourage co-operative forms of housing by publicising its benefits and encouraging complementary schemes, like carpooling to ensure good transport links.

Shared mobility ventures like Uber can increase women’s participation in the night-time economy, prevent drink-driving and reduce the number of cars on the road, yet have tended to have a confrontational relationship with cities. A collaborative relationship could benefit both parties.

If some of the barriers preventing disadvantaged groups participating – like the need for a credit card, smartphone, or driver’s license – could be overcome then this could be even greater. Integrated into the fabric of local society, the sharing economy could relieve the demand on services, provide equitable access to assets and foster more connected communities.

3 Responses to “The sharing economy could be transformational for the UK. So why are we lagging behind?”