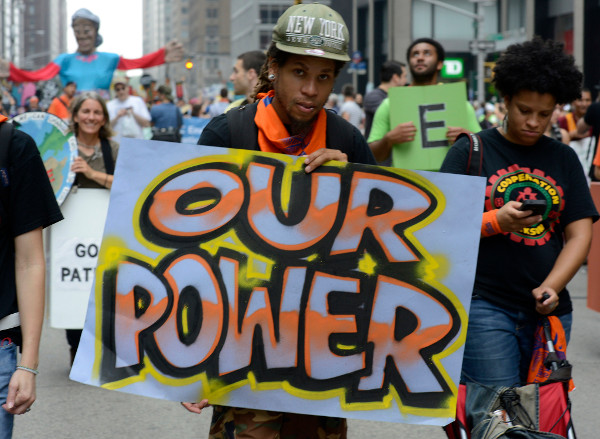 This weekend, the Paris climate talks known as COP21 are drawing to a close. The talks are aiming to secure a global agreement to limit greenhouse gas emissions enough to keep us safe from catastrophic climate change. But it’s clear that if we want real action to be taken, we can’t leave it to those around the negotiating table.

Governments with austerity agendas and corporations motivated by profit and shareholder dividends don’t care about young people’s futures. I’m 24 and can expect to live to around 90. This means I will likely live to see 2100.

By this point, scientists predict that, without radical action on climate change and a transition to renewables, we’ll experience some of the most damaging aspects of climate change like extreme droughts and floods, and associated effects like mass migration.

That is based on conservative estimates, and with the assumption that yet again, world leaders will fail to grasp the urgency of the need for action.

A coalition of the world’s countries most vulnerable to climate change like Bangladesh and Kiribati called the Climate Vulnerable Forum have said that this does not go far enough, demanding that the global agreement is that we commit to less than 1.5C of warming. More than that, and science says sea level rises will destroy their homes and produce hundreds of millions of climate refugees.

How is it conscionable that the international community would sacrifice the homes, livelihoods and lives of millions of people? Capitalism and profit are powerful things. Saudi Arabia and India blocked the publication of a report which states that warming above 1.5C is dangerous for millions of low lying communities, in the name of their domestic economic growth.

“We are the people we’ve been waiting for” is a powerful phrase I’ve seen used by green campaigners, and it couldn’t be more relevant now. It is left to us – young people without parliamentary nor corporate power, to make world leaders realise that they must act now. They must work together to come to an ambitious global agreement.

Major changes in policy in the past, like abolishing the slave trade, reunifying Germany and the collapse of apartheid have not been brought about by careful political negotiations alone. They changed because people went into the streets and demanded better. They committed civil disobedience and gained the attention of the press and the public.

It is vital that we come together on Saturday 12th December in Paris to demand that the powers that be act now to secure the future of everyone.

As the Federation of Young European Greens rightly put it in one hashtag: #ItsOurFuckingFuture.

14 Responses to “COP21: We are the people we’ve been waiting for”