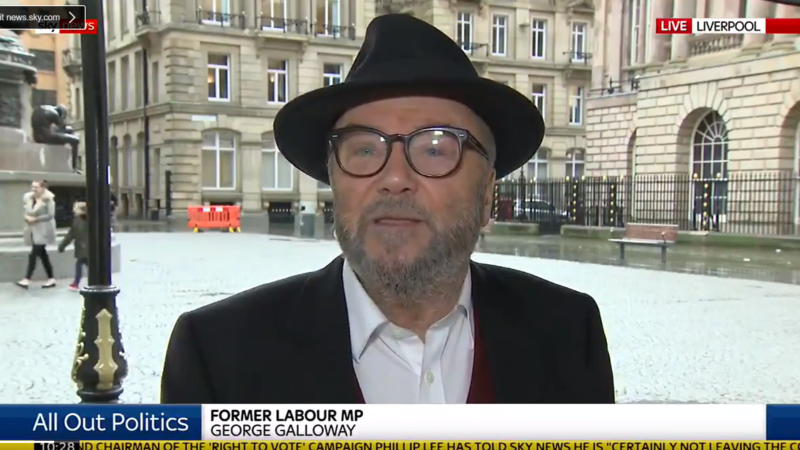 An interview with London mayoral candidate George Galloway in the Evening Standard repeats a common falsehood about the ex-MP.

“There’s talk that Galloway would like to re-enter the Labour fold — he was expelled in 2003 for ‘bringing the party into disrepute’ over his opposition to the Iraq war.”

The phrase ‘over his opposition to the Iraq war’ is used about Galloway routinely in every news outlet in the land.

However, it is false – or at best, very subjective.

Galloway was found guilty by a tribunal set up by the Labour party’s National Constitutional Committee in October 2003 of the following charges:

He was cleared of a fifth charge, that of ‘inciting Plymouth voters to reject Labour MPs’. Some of the charges related to a speech he had given to Abu Dhabi TV. As the Guardian reported:

“Mr Galloway told Abu Dhabi TV that the war in Iraq was illegal and urged British troops not to obey ‘illegal orders’.

And he asked: ‘Why don’t Arabs do something for the Iraqis? Where are the Arab armies? We wonder when the Arab leaders wake up? When are they going to stand by the Iraqi people?'”

Galloway denied all the charges, including that of calling for attacks on British troops, saying he was questioning why Arab regimes continued to supply Britain and the US with oil.

However, the phrase ‘Where are the Arab armies?’ suggests otherwise, since armies do not control oil exports.

Galloway also warned that other anti-war MPs would be next, naming Glenda Jackson and Bob Marshall-Andrews QC. However, no other MPs were charged with these actions.

Several Labour MPs were opposed to or critical of the Iraq war, including cabinet ministers like Robin Cook, who resigned on the point, and Clare Short, who campaigned against the war after she left office.

The assertion that Galloway was expelled from the Labour party ‘over his opposition to the Iraq war’ is at best subjective, and is inconsistent with the party’s decision and the experience of other members of parliament.

As NCC chairman Ian McCartney said at the time, the proceedings ‘came in direct response to an unprecedented number of complaints from party members and members of the public.’ He added:

“The issue here is a very simple one. George Galloway incited foreign forces to rise up against British troops at a time when they were risking their lives.

“He was the only Labour MP to do this and he has never taken back or apologised for these comments.

“Any reasonable person would have been disgusted by this incitement and I believe the NCC reached the right verdict today.”

Galloway went on to stand against Labour as a Respect party candidate on three occasions: first in Bethnal Green and Bow in 2005, when he was successful, then in Poplar and Limehouse in 2010 when he came third, and again in a Bradford West by-election in 2012, which he won. He was defeated in this year’s general election by Labour’s Naz Shah MP.