Cox makes a radical departure from current parliamentary debate, while Benn remains within the parameters 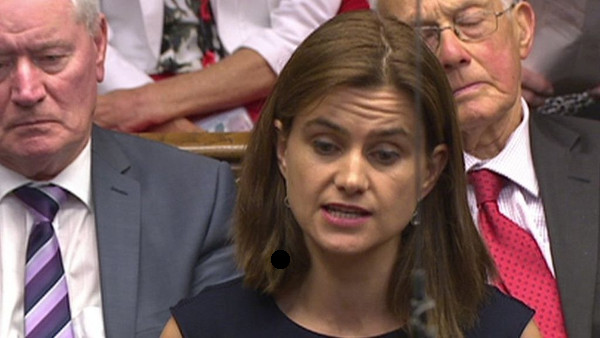 Jo Cox, Labour MP for Batley and Spens (formerly of Oxfam), has ignited parliamentary debate in the run-up to a vote on Cameron’s proposal to extend the UK’s bombing campaign of ISIS to Syria.

Her Observer article last Sunday, co-written with Conservative MP Andrew Mitchell, and her speech in the adjournment debate in the House of Commons on Monday, have put the protection of Syrian civilians at the heart of parliamentary debate for the first time ever.

It is a bold and radical attempt to escape the sterility of parliamentary and media discussion on the subject of Syria by introducing the voices and real concerns of Syrians. For that, I congratulate her from the bottom of my heart.

Cox’s speech has also provoked, in media-speak terms, the spectre of another revolt of Labour MPs against Jeremy Corbyn—as if the most important thing at stake here was the fate of Jeremy Corbyn’s leadership.

For that reason, discussion amongst members of the shadow cabinet has led to shadow foreign secretary Hilary Benn responding to Jo Cox’s initiative with an article for The Guardian.

That it is a response is illustrated by his opening paragraph which closely echoes that of the Cox/Mitchell article. There are significant differences however: both refer to the historic test facing us in response to the humanitarian disaster in Syria, but Cox’s starting point is the woeful inadequacy of the international community’s response ‘through the UN’, whereas Benn merely says ‘no one has taken responsibility’.

This difference in phrasing is no accident, since Benn goes on to reiterate the Labour leadership’s position, expressed at Labour Party conference, of reliance on the UN Security Council. Jo Cox recognises, unlike Benn, that this has been a recipe for doing next to nothing.

Cox makes a radical departure from current parliamentary debate, while Benn remains within the parameters set in the previous parliament. He says that the government (with Labour support) was right to join the coalition’s air campaign against ISIS in Iraq; without considering the shortcomings of that campaign on the ground, he responds only to Cameron’s proposal to extend it to Syria.

Because Benn shares the government’s priority of fighting ISIS he is constrained by the discourse of the ‘War on Terror’, indiscriminately used by regional and world powers to pursue their own interests.

Indeed, he seems to suggest that Russia is an ally in the war against ISIS, in contradiction to his own acknowledgement that Russia’s purpose, well attested by now, is to prop up the failing Assad regime. He refers only in passing to Assad’s barrel bombs, but concentrates mainly on the threat posed by ISIS.

Jo Cox on the other hand—because her starting point is the protection of civilians—states firmly that ‘it is not ethical to wish away the barrel bombs from the Syrian government when you have the capacity to stop them’.

She pointed out in her parliamentary speech that Assad kills seven times as many civilians as ISIS, and that a fight against ISIS has to be accompanied by an equal focus on Assad.

The solution she proposes is the creation of ‘safe havens inside Syria which would eventually offer sanctuary from both the actions of Assad and ISIS’. In an ITV interview, expanding on her article, she explicitly calls for a ‘no-bombing zone’ across Syria, which could be implemented by the UK or other Western powers within their current capacity from the Mediterranean sea.

Hilary Benn’s proposal is ‘a UN resolution for effective action to end the threat from ISIS’.  He does not spell out who is at risk from ISIS—he commits the common mistake that Jo Cox avoids, of eliding a concern for ‘Syria’s people’ with the West’s security concerns.

He moves beyond the War on Terror discourse when he argues for ‘safe zones in Syria to shelter those who have had to flee their homes’, effectively IDP camps inside Syria.

Unlike Cox’s plan, that would not protect civilians in the cities towns and villages of the liberated areas who are suffering relentless bombardment on a daily basis. But it would provide some relief, as well as limiting the numbers of those fleeing beyond Syria’s borders.

But to accomplish it, Benn relies on a UNSC resolution. There have been several resolutions to constrain Assad’s attacks on his civilian population, and to enforce the provision of aid to besieged areas without the regimes permission, none of which have been enforced.

The resolutions with teeth have been vetoed by Russia and China. That is why Jo Cox, despite her express support of the UN, goes beyond a reliance on it to propose unilateral or multilateral action as supported by international law.

Thirdly, Benn calls for ‘the referral of suspected war crimes to the ICC’. This is a token gesture towards the principle of international justice, without any reference to previous failed UN Security Council resolutions (due to Russia’s veto) or to Syria’s non-membership of ICC which makes a UNSC resolution the only avenue to the ICC.

Unlike Cox, Benn resorts to proposing solutions which have been tried before and have failed. An empty threat will certainly not deter either Assad’s or Putin’s bombing of civilians.

Benn does make one acknowledgment of the limits of his proposals, saying ‘of course we know that any resolution may be vetoed and in those circumstances we would need to look at the position again’.

This is a tentative proposal to go further than his position outlined at the Labour Conference, and is certainly an improvement on Miliband’s, which was simply to do nothing. If it does represent the position of the shadow cabinet it is a small but significant, and welcome, shift in Labours position.

But it remains an inadequate response to Jo Cox’s brave attempt to move the debate on Syria in a progressive, humanitarian direction. Her plan, unlike Benn’s, is a genuine challenge to Cameron.

I sincerely hope that Labour and other MPs will follow her lead and encourage the Labour leadership to recognise the limitations of their focus on ISIS rather than Assad, and the lethal danger of their reliance on yet another drawn-out UN process while time is running out for Syrians.

Clara Connolly is an immigration and human rights lawyer, and an activist in Syria Solidarity Movement UK