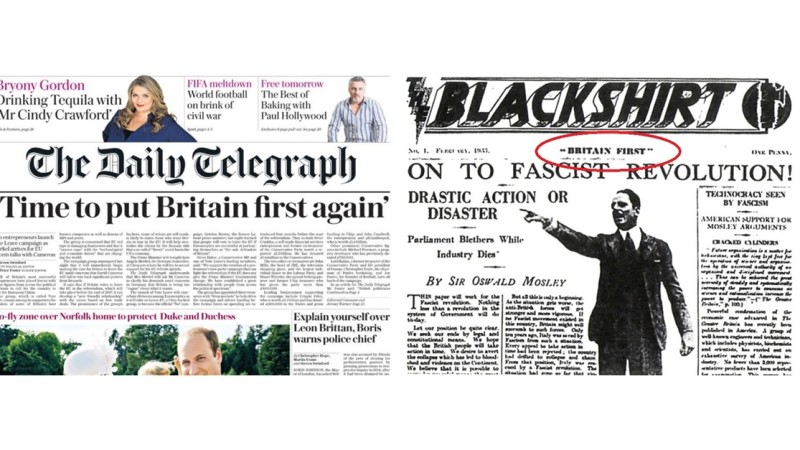 It’s not every morning you see political extremism of a kind the prime minister often warns about plastered on the front of a newspaper.

Yet this morning’s Telegraph manages to serve up a slogan straight from the 1930s in today’s gripping headline: 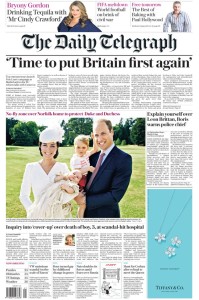 ‘Britain First’ is not only the name of a neo-fascist group of ex-British National Party types currently filling the market hole provided by that party’s implosion.

It also featured in the masthead of The Blackshirt, a newspaper produced by Oswald Mosely’s Nazi-supporting British Union of Fascists in the 1930s. 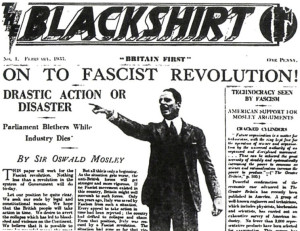 The slogan was later nabbed by the America First Committee in the United States, whose spokesman Charles Lindbergh famously accused ‘the Jewish’ of trying to drag America into World War II.

It’s worth noting that the phrase ‘Britain first’ or ‘Time to put Britain first again’ does not appear anywhere in the Telegraph’s story – not in the quotes, nor in the related article by Joe Foster, co-founder of Reebok and funder of the ‘Out’ campaign in the coming EU referendum.

Yet there it is in the Telegraph’s front page headline, in quotation marks.

One hopes the paper was not aware of its sordid historic and present associations.

As the prime minister meets with German chancellor Angela Merkel today to discuss EU reforms, campaigners on all sides should take note:

Recycling a fascist slogan, consciously or otherwise, is the worst possible way to debate membership of the European Union.

And if this is the only way to express your argument, perhaps there is something rotten about it.