Turkish neighbours have clearly played a big role in helping the Syrians, but there is no hiding the fact that community tensions are rising 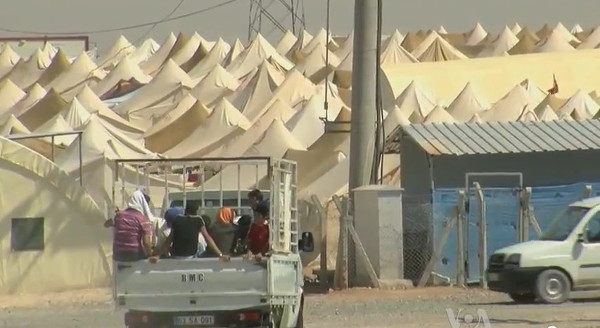 I have recently returned from a visit to south east Turkey, home to 1.4 million Syrian refugees. Some live in vast refugee camps, but the majority – 85 per cent – live among the local community.

While many in Europe are rightly praising Germany for providing asylum to hundreds of thousands of refugees, we really should give credit to Turkey, which has welcomed 1.9m Syrians since the outbreak of war, giving them a temporary protection status which entitles them to services including access to basic healthcare and education. A decision on access to the labour market has been postponed until after elections in November.

As Britain debates taking 20,000 refugees over five years, we would do well to think about the generosity of this middle income country, not without its own problems, but which has nevertheless done so much.

Our trip began in Kahramanmaraş refugee camp where 17,590 people live in more than 3,000 tents. The camp had been built and paid for by the government of Turkey, with international aid agencies now helping to sponsor projects. The camp is ‘5-star’ compared to those in other countries, I was told by UN agencies. True enough, there are good facilities. Each family has their own tent and there are schools run by volunteer Syrian teachers offering the Syrian curriculum as best they can.

UNICEF supports special projects for orphaned and traumatised children, puts on activities and sets up libraries. The World Food Programme (WFP) runs a food card scheme so families can buy their own food at either of the two well-stocked supermarkets onsite. There is even a shopping street where Syrians living in the camp draw lots to set up mini businesses such as phone card shops, clothes stalls, etc. Not bad you might think. Basic needs are met – and a bit more besides.

But think again and imagine the situation a little deeper. We are talking about a region where summer temperatures are around 38°C on average, but plummet to -10°C in winter. Imagine living in a tent in this weather. A place where, yes, the young children go to school, but there is little on offer if you’re in your teens – your chances of finishing school or starting a university course are slim.

If there is work, it is illegal, moonlighting on low wages which causes tension with Turks in the area. You may have seen real atrocities, have lost literally everything behind when you left, or have family members trapped back in Syria.

You’re living in limbo, not knowing what the future holds. It’s little wonder that while the young children smiled, the eyes of anyone over fourteen were full of sadness.

Back in the main town of Gaziantep, our delegation of MEPs visited Syrian families living in the local community. Many are dependent on soup kitchens or other forms of food aid provided by the WFP and another UN agency, the IOM (International Organization for Migration). Outside the camps fewer children get to go to school, though the Turks are trying, for example by running shift systems in schools. UNICEF is starting up a school bus service to get children out of overcrowded neighbourhood schools and into the suburbs.

Turkish neighbours have clearly played a big role in helping the Syrians, but there is no hiding the fact that community tensions are rising. The Syrian ‘guests’ outnumber Turks in some towns, and by working in the black economy, are seen to be pushing wages down. There is pressure on housing – one family was living in a garage – and much talk of rising rents. The special UN-supported food cards are eyed jealously by poorer Turks, and the sheer numbers of people, never mind those Syrians with complex needs, are putting strains on the health system.

Our group met one Syrian family whose home had been bombed, killing several family members and leaving four children without limbs, needing complex medical and psychological support. Everywhere I met people who, after three or more years, are exhausted, frustrated and increasingly desperate. Top of the wish list of most is to go home, but only of course if they can live in peace and security, an option not on the table at present.

But while life in Turkey is tough, on our last day I met aid organisations involved in highly dangerous cross-border work, taking aid to the millions of Syrian families caught up in the war. They reminded us of the dire conditions for civilians in Syria where more than seven million people are internally displaced, fleeing government bombs, other armed groups or the advancing ISIS forces. We heard about Aleppo, which only has 55 doctors left and where there is an urgent need to find some way to pay doctors.

More aid, humanitarian corridors and no fly zones to stop the civilian bombings are crucial, we were told. Unless that aid is forthcoming, more Syrians will lose hope and start the journey over the border and beyond.

This week the prime minister is visiting Lebanon, another country hosting a million Syrian refugees. He talked about how the UK is one of the biggest bilateral donors to Lebanese camps. True, and commendable. But other countries – Germany, Sweden, Greece and Italy to name but a few – have also spent billions dealing with refugees on their own soil, through bilateral aid and also by donating through the EU and other UN agencies. So getting into a debate about who has done more is not helpful.

The truth is that no one is doing enough. UN agencies are running out of money. Smaller aid agencies – particularly those on the frontline in Syria – are desperate for help. And the governments in neighbouring states like Turkey need our solidarity.

We all have to do more, and fast.