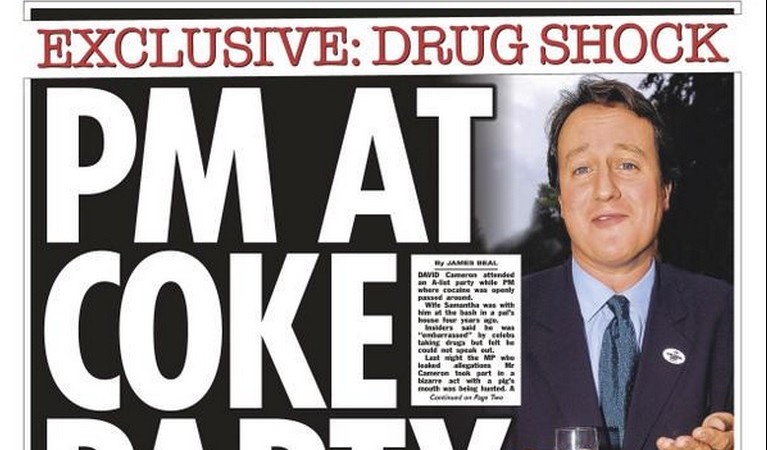 Surprise! We asked yesterday whether the Sun would put #piggate on its front page, replete with its trademark headline puns, mock-ups and cartoons.

Failure to do so, we said, would expose how the paper puts party bias ahead of its role as an irreverent tabloid.

Imagine how the Sun would have covered Lord Ashcroft’s claims if they were made about Labour’s Jeremy Corbyn, let alone Ed Miliband…

So to today’s front page. Judge for yourself: 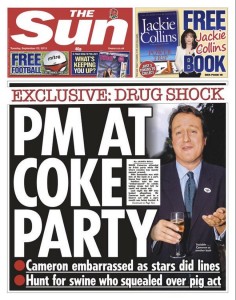 Pig-related puns do appear at the foot of the page, but only about the ‘swine who squealed’, referring to Ashcroft’s sources.

Instead, the story focuses on claims about drug parties, which the paper knows are far less embarrassing to the PM.

This approach continues inside the paper, where a story spins the pig’s head claims into Downing Street launching a ‘witch hunt’ to find the MPs who ‘squealed’.

(Note to the Sun: the thing about witch hunts is, witches don’t exist.)

The best it can offer is a small digest of cartoons from Twitter – plus a column by Cameron’s friend Toby Young saying the claims are ‘porkies’.

On the usually boisterous Sun Says editorial page, there is precisely no mention of any of Ashcroft’s claims.

How to explain this amazing restraint?

The Sun’s Murdoch-owned stablemate the Times provides a clue. 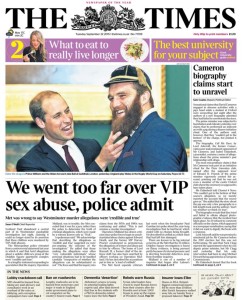 A small story on its front page begins:

“Sensational claims that David Cameron engaged in obscene activities with a pig’s head while a student at Oxford were unravelling last night after the authors of a new biography admitted they had failed to corroborate the story.

The prime minister was subjected to humiliation and ridicule yesterday over claims that he performed an indecent act with a pig during a bizarre initiation ritual.”

‘The prime minister was subjected to humiliation and ridicule’ – this is an invitation to sympathise with the most powerful politician in the country. Is he incapable of defending himself? Either way, it’s very good of the Times to step in on his behalf, (unsolicited, naturally).

Again, there is not a single comment about the Ashcroft claims – no pigs, no non-doms, not even drugs – on the editorial page of the Times.

There is a light-hearted column by Hugo Rifkind (which accepts the drugs claims aren’t interesting). And there is a cartoon of Cameron holding a pig – but the butt of the joke is Labour’s Jeremy Corbyn.

It looks remarkably like the Murdoch press is playing the part of the Conservative party’s press office, yet again.

The Sun has thus relinquished its defence for daily insults to its readers’ intelligence.

It isn’t ‘giving the people what they want’. Plenty of Sun readers wanted to see Cameron get a ribbing over #piggate.

It isn’t giving each story the same irreverent treatment.

Where its political team is concerned, the Sun plumps for deference over irreverence, and ducks its responsibility to do the one thing it does well.

Like this story? Support our work: visit our crowdfunding page here.