The press attacks have begun, with Corbyn blasted as hypocrite and traitor 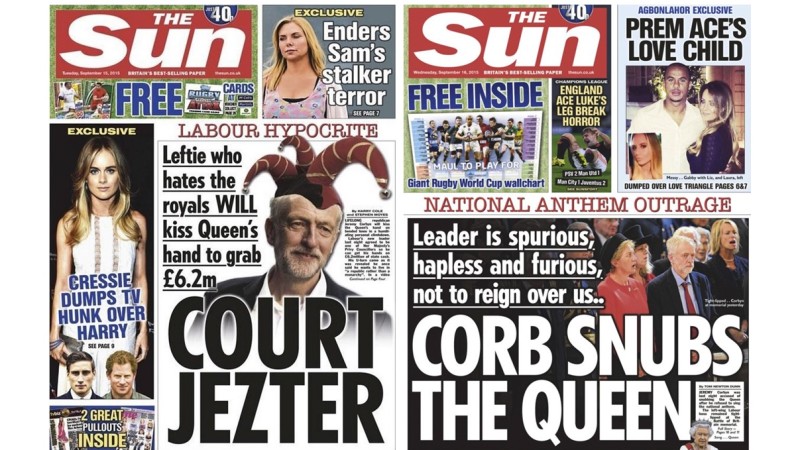 Since then the paper’s eagerness to paint Corbyn in a bad light has seen it commit a massive contradiction worth highlighting. 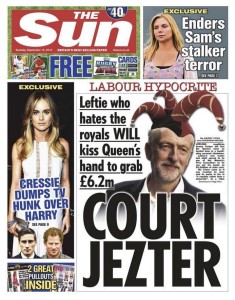 As the Sun Says column explained:

“Corbyn, a lifelong republican, will kiss the Queen’s hand and swear allegiance to secure millions in funding for Labour. […]

How many other ‘principles’ will be jettisoned before the scales fall from the eyes of his naive young supporters?”

It turns out the Sun’s own source for the story claims there was no link between the deference and the cash. But on today: 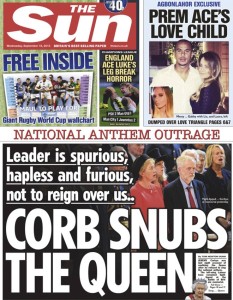 “Jeremy Corbyn was last night accused of snubbing the Queen after he refused to sing the national anthem.

The left-wing Labour boss remained tight-lipped at the Battle of Britain memorial.”

In other words, within 24 hours the Sun went from calling Corbyn a court jester to saying he snubbed the Queen.

Imagine for a second what would have happened if he had declined to swear allegiance to the Queen but then did sing the national anthem at the memorial. Would the Sun have just reversed its front covers these last two days?

Whatever Corbyn does here he’s going to be accused of both hypocrisy and treachery. Such is the fate of a backbench rebel suddenly in the national spotlight. The Sun has clearly started as it means to go on: attack, attack, and attack again – consistency be damned.

Today’s story deserves another point, especially as every paper bar the Daily Mail has run it on page one.

There may be an argument that as Labour leader, Jeremy Corbyn should swallow his pride and sing the national anthem to avoid causing a row or annoying much of the electorate – especially at a memorial service for the country’s fallen.

But the fact is, neither Jeremy Corbyn nor anyone else may be forced to sing the national anthem.

“If we live in a free country we must be free to not sing God Save The Queen. […]

Whatever your thoughts about Corbyn he has always been clear about his republicanism.

But moreoever, whether republican or not it can’t be right that people are brow-beaten into singing a religious ode to the Queen.”

Even the most ardent monarchist would hopefully consider this reasonable.

The freedoms we are told were defended by the war must surely include the right not to sing if one chooses.