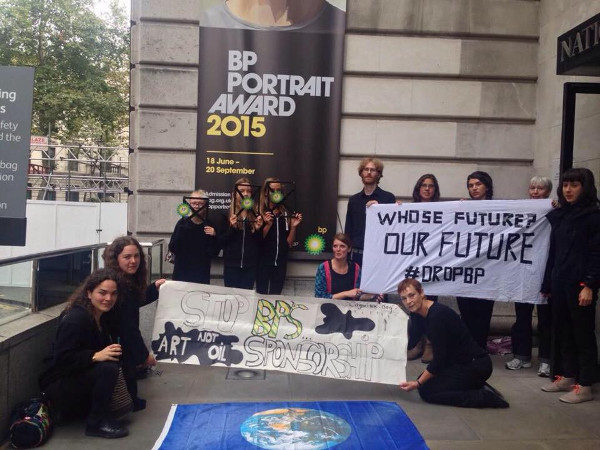 You might think that the British Museum is a strange place for climate activists to focus some of their energies, but yesterday myself and numerous different groups carried out a series of creative interventions in various parts of the building because British Museum is endorsing what BP (and other fossil companies) are doing to prevent meaningful action on climate change.

This December, world leaders are going to gather in Paris for a crucial UN conference where they will attempt to sign-off on a global deal to cut carbon emissions and tackle climate change. However, ‘attempt’ is the key word because in many ways, it’s a conference and a deal that has already been rigged. Even those leaders attending the conference with genuine ambition will be negotiating within the red lines of the fossil fuel industry – lines that have been locked in by relentless closed door lobbying.

It was recently revealed how BP, alongside a host of other oil and gas firms, made a concerted push to curb support for renewable energy. Last year, the European Commission outlawed most subsidies for renewables from 2017 and ended nationally binding renewable energy targets after 2020 – policy changes specifically requested by BP and other trade associations. BP is also at the heart of behind-the-scenes lobbying to scrap environmental safety measures on fracking at the EU level – referred to by the UK government as ‘unnecessary red tape’.

By now, you might be wondering how the British Museum fits into this picture of lobbying and influence. Currently, BP is the sponsor of four iconic cultural institutions in London – the British Museum, the Tate, the National Portrait Gallery and the Royal Opera House. In the face of growing understanding around climate change and the need to shift away from fossil fuels, BP desperately needs to present itself as progressive, to show that it should remain integral to our society and ways of living.

The British Museum, by accepting BP sponsorship, gives the oil company this desperately needed ‘social licence to operate’. BP emerges with a brand cleansed of the associations of its Gulf of Mexico spill and a favourable light in the eyes of government ministers.

The museum itself displays objects from many different cultures around the world. From its founding, the museum granted free admission to ‘studious and inquiring persons’ but it doesn’t take much inquiry to realise that many of the objects on display originate from cultures now under threat from climate change or those that have been directly impacted by BP’s flawed attempts to extract oil.

Earlier this year, the museum demonstrated a whole new level of this cognitive dissonance by allowing BP to sponsor its ‘Indigenous Australia: Enduring Civilisation’ exhibition. Despite the well-documented impacts of the extractive industries and climate change on Aboriginal peoples, the museum decided not to inform the Aboriginal communities who had lent objects to the exhibition that BP would be the sponsor.

Meanwhile, BP attempts to paint itself as a philanthropist, falsely claiming that it is corporate sponsorship that allows museums and galleries to remain free. The museum was founded in 1753 yet BP has only been a sponsor for nineteen years, and we know that for ten of those years, BP’s contribution made up a meagre 0.8 per cent of the museum’s overall income. In reality, BP’s sponsorship deals are just a form of cheap advertising or ‘artwash’.

On Sunday, I joined sixteen campaign groups in taking over spaces across the British Museum in order to hold our own special event – a festival of performance and debate in opposition to BP’s logos. On one level, we celebrated art making untainted by oil sponsorship but on another, we were exposing and breaking those crucial ties that have allowed BP to repeatedly derail climate legislation.

Some of the performers who took part were just twelve and thirteen years old and for them, if ambition were allowed to flourish at December’s climate conference, then it would be a significant step towards safeguarding their future.

However, it is perhaps Cherri Foytlin, a resident of the Gulf Coast who experienced the impacts of BP’s spill first-hand that best sums up our motivations for having occupied the museum:

“BP has destroyed life in the Gulf – both human and ecological – and by doing so they have destroyed the greatest creation, the highest of art. Yet the British Museum and others show little concern.

“How would they feel if the most prized of their collections were smeared with oil? It is our sincerest hope that one day these museums will value creation as much as a painting of creation. When they do, there is no doubt that they will expel BP from their donors list.”