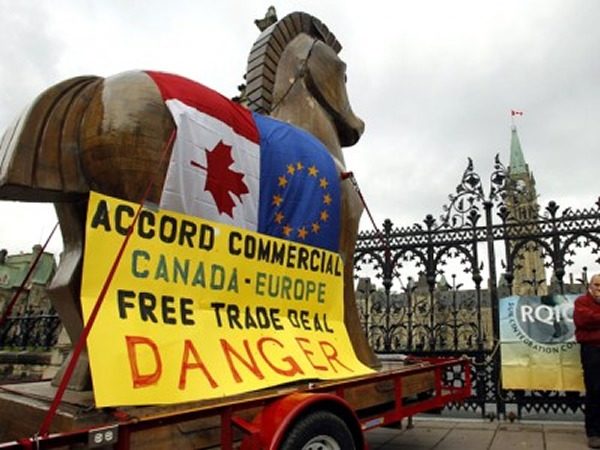 The EU/Canadian Free Trade Agreement (CETA) may have run into more trouble following news that the EU trade commissioner, Cecilia Malmström, has indicated that that there are now “no plans” to change the initialed agreement containing a rejected ISDS clauses – as she had previously said would happen.

The Investor State Settlement clauses – which allow secret courts to adjudicate on disagreements between companies and sovereign states and on the ability of companies to sue sovereign countries at the ISDS court if they believe a country has taken actions which effect their profits or interests – have been holding up what the commission has described as “legal scrubbing”  – tidying up the legal language and drafting errors.

In June of this year Ms Malmstrom said the CETA deal would be ready by the end of July. She acknowledged that the investor state dispute settlement clauses remain in place. “We haven’t started with that yet,” she said, arguing that only three pages of the treaty deals with the sensitive issue, whereas “there are 1597 pages talking about other things”.

Zeit Online reports (original in German) that Ms Malmström has no plans to try to change CETA before it is signed, merely saying that afterwards there will be a “check” on the ISDS mechanism – farcical.

CETA’s current ISDS clauses are worse than previous drafts and the indications are that German’s chancellor, Angela Merkel, is not happy with the ISDS clauses in CETA; the French government has said that if the ISDS chapter is not re-written France will not sign up to the treaty.

The European Parliament also said that ISDS have to be replaced with “a new system for resolving disputes between investors and states which is subject to democratic principles and scrutiny”.

For the time being, Ms Malmstrom’s failure to secure any satisfactory changes to the CETA ISDS clauses will make it much harder to get the deal through.

One Response to “Has the CETA free trade deal run into more trouble?”