Newspapers should report and scrutinise, not spin or cheer the government 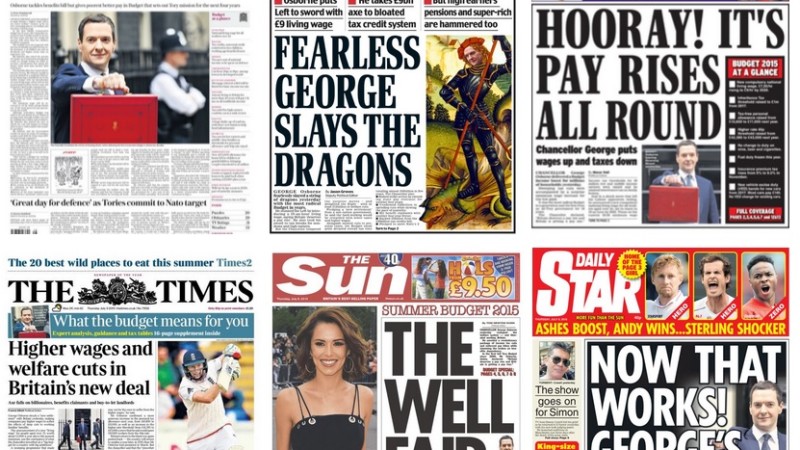 What is the role of a national newspaper when the government announces a budget?

1. Report what’s in the budget in a clear, simple, but accurate way.

2. Scrutinise what’s in it, the claims made about it by the government, and the way it has been presented.

What the papers ought not to do is spin the budget to make the government look good, or try to condition what the public thinks about it in the manner of a used car salesman.

Most of the papers have given a fairly clear and accurate (though heavily spun) account of the budget’s contents. Where they fall down is taking a scalpel to it and the spin put on it by the government.

On the contrary, most papers today actually cheer and laud the government for giving us such a wonderful budget. 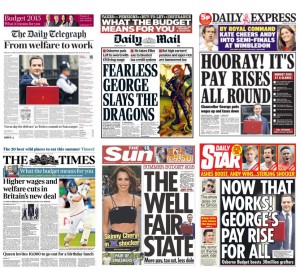 The Daily Mail, not a fan of this government, ran with ‘Fearless George slays the dragons‘, along with a cartoon of chancellor Osborne as the English patron saint. (The Sun did the same thing before the election.)

It’s very unusual for the Mail to run a Sun-like cartoon on its front page, in a space usually reserved for pictures of attractive (or distraught) women.

The Sun itself hailed the budget as ‘The Well Fair State‘ (get it?) adding: ‘More pay, tax cut, less dole’.

The Telegraph’s headline is simply the name of a Tory policy (‘From welfare to work‘), with a second story welcoming Osborne’s pledge of 2 percent defence spending.

The Express was the least restrained, literally cheering for the budget, with: ‘Hooray! It’s pay rises all round‘.

The headline bizarrely invokes US president Franklin Roosevelt’s New Deal of the 1930s, a massive expansion of the role of government which saw the introduction of social security – the equivalent of Britain’s welfare state.

In presenting the budget in a way that tells readers how they ought to think about it, the papers are certainly in well-trodden ground.

But we shouldn’t get so used to this dereliction of duty that we accept this as the standard for national journalism – let alone that we passively accept its insulting message.

The Sun won’t tell you why train staff are striking. So we will