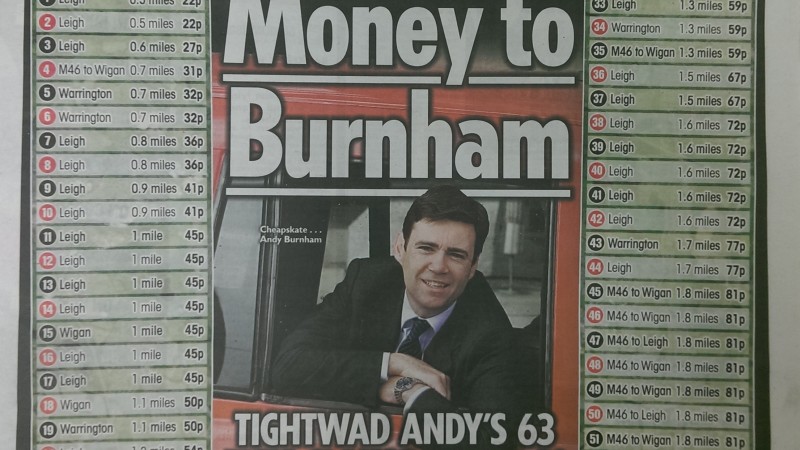 Today’s Sun contains what must be the first ‘expenses scandal’ story to expose an MP for claiming very small amounts of money.

The paper reports Labour leadership hopeful Andy Burnham claimed a staggering £39.18 over the past four years to reimburse his petrol costs when using his own car for official business.

This breaks down as 63 claims of less than £1 each. 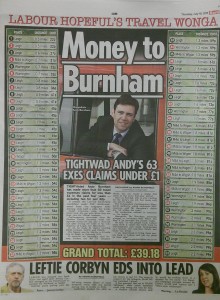 As the story notes, MPs can claim 45p per mile when using their own cars for work. Apparently ‘tight-fisted Andy’ (their words):

“…made two separate claims for 22p and a third for 27p after driving 0.6 miles in his constituency of Leigh, Gtr Manchester.”

So… what’s the story?

The angle appears to be that other leadership candidates have not claimed these tiny travel expenses, so Burnham must be abnormally stingy and money-grabbing, (qualities you’d think the Osborne-fancying Sun would appreciate).

But if the rules allow him to claim this amount for use of his own car, then the Sun’s real gripe is with the parliamentary rules, not Burnham.

Perhaps the paper could use its influence to campaign for a reform of these rules, if it feels so strongly? (No such call for reform features in today’s paper.)

The emphasis is interesting. This story, about an MP claiming less than £40, takes up a whole page in the Sun.

Meanwhile, the same paper cheers on the chancellor as he looks to cut £12 billion from the welfare budget, and it appears to have no interest in the £93 billion the government spends on welfare for corporations, via direct grants and tax breaks.

Has the Sun got its binoculars the wrong way round? or both contact lenses in one eye?

Or perhaps it hopes to shape readers’ opinions before Labour has even chosen a new leader.