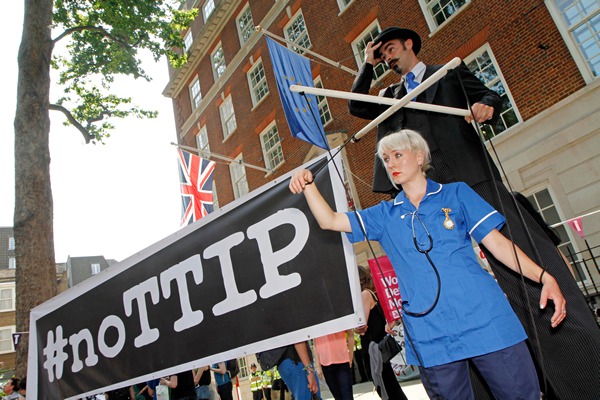 On Wednesday, Labour MEP Jude Kirton-Darling published a blog on Left Foot Forward defending her decision last week to compromise on a key vote about TTIP – the Transatlantic Trade and Investment Partnership. She criticised 38 Degrees’ reaction to her decision. I’ll do my best to respond to her.

It’s important to start with a bit of background. 38 Degrees is member-led. Millions of ordinary people across the UK come together and campaign together on things that matter. One of those things is TTIP: you can see our most recent member poll results here to understand how much of a priority stopping TTIP is to 38 Degrees members.

The 38 Degrees TTIP campaign was chosen and shaped by members across the UK. It includes our opposition to any form of ISDS in TTIP. ISDS stands for the Investor State Dispute Settlement mechanism: the part of the deal that would let corporations sue our government if our laws dent their profits.

Similar mechanisms have been used in other countries to, for example, allow tobacco company Philip Morris to bring a lawsuit against Australia for introducing plain packaging, and a lawsuit against Uruguay for increasing the size of health warnings on cigarettes.

38 Degrees members have overwhelmingly said they do not want ISDS in the deal. Labour MEPs – including Jude Kirton-Darling – have agreed with that.

Last week’s vote, and the vote next week, are rare opportunities to throw sunlight on the deal. TTIP has been negotiated in secret, locked away from the democratic process for too long. These votes allow the EU Commission to see what the people of Europe will – and won’t – tolerate.

Labour MEPs gave assurances to their constituents that they would vote against ISDS. Jude Kirton-Darling even said that ‘EU citizens will not accept MEPs to compromise on ISDS’. And then, behind closed doors, they made a compromise.

That compromise told the European Commission that the people of Europe would tolerate ISDS.

Jude talks about the importance of the compromise. But most people expect decent politicians to vote with their principles and stick to their promises, not make last-minute backroom deals.

She complains that the European Parliament, and MEPs like her, don’t have enough power over TTIP. That’s absolutely right. So Jude can probably imagine just how disempowered ordinary people – with less influence than her – feel about this deal. As an MEP, she has a rare chance to affect the European Parliament’s official position on TTIP.

And she rightly says that it will be a long time before MEPs get their final vote on TTIP. So imagine a scenario where Jude and her colleagues hadn’t compromised on ISDS. She and her colleagues could have shown the European Commission that the Labour Party and the S&D group will not pass a TTIP with ISDS in it. They could have spent the next couple of years lobbying others to join them.

Given all that, it’s legitimate to ask why they chose to compromise now.

Jude accuses the 38 Degrees campaign of reducing ‘political values and ideals to a binary opposition of right and wrong.’ Yes, it’s easy to hide behind complexity. Yes, TTIP is complicated, and so is the European Parliament. But I think in this case there was a right, and there was a wrong. And most 38 Degrees members feel that Jude did the wrong thing.

I can understand that Jude feels wounded by this, after the work she has done up until now working against ISDS. But making a compromise that is against what you say you stand for – and then criticising those who call you out on it – is exactly why many people feel alienated from politicians.

Jude has said that she will vote against ISDS if she has the chance to next week, though her voters would be entitled to wonder whether she will compromise on this too. And if Jude does stand by her principles next week, she can be in no doubt that 38 Degrees members will applaud her for it.

16 Responses to “There can be no compromises on TTIP”