Once our public services have been sold to make profits for a wealthy few, we can't get them back. 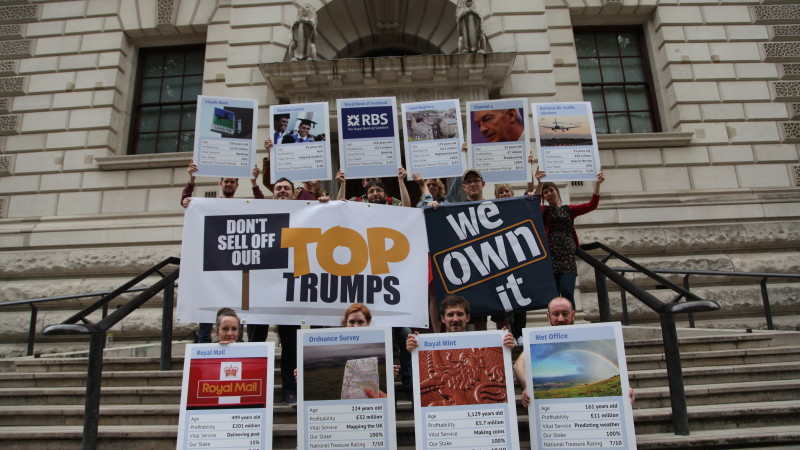 I’ve never enjoyed handing out leaflets as much as I did at the People’s Assembly march on Saturday, where we launched our new campaign against George Osborne’s plans to sell off £23 billion of public assets.

We propped up ten giant ‘Top Trumps’ cards highlighting some of these public assets – Ordnance Survey, the Royal Mint, the Met Office and more – against the outside of HM Treasury, and the fun began.

It was a busy day in London, as always. People were marching against austerity, chatting to friends, seeing the sights at Westminster, or just rushing from place to place. Most people rushed on by the first person who offered them our leaflet.

Then they caught sight of the giant cards with their colourful pictures and key facts. They stopped, they stared, they had a proper look, they started to gather, stand still and chat – before accepting the next leaflet they were offered.

Our leaflet-givers cunningly positioned themselves to take advantage of this process. The comments started, and the conversations.

‘That’s outrageous’ – from two members of the police.

‘But how can they sell off Ordnance Survey?’

‘If these things were run privately, surely they’d cost us more or the quality would go down?’

‘Really? The Royal Mint is over a thousand years old?’

‘This is great!’ (The campaign, not the sell off.)

‘They’re just a bunch of gangsters’

‘But why are they selling them off, Mum? Why?‘ – this from a cute Brummie girl who was about seven years old.

People got out their phones and started taking photos or filming what was going on, zooming in close to check out the detail on the cards.

George Osborne wants to privatise as much as he can, as quickly as he can. He is counting on people not to stop and stare, or pay too much attention, or start talking to each other about his plans.

He’s gambling on the fact that people are rushing from one thing to another, and far too busy to pay attention to a few seemingly obscure public assets that happen to still be owned by us.

But as soon as the public finds out about the vital statistics of some of these services, they will look again at what the chancellor is doing, and they will ask the obvious question, just like that child did: ‘But why George? Why?‘

Osborne’s sell offs don’t make sense and can’t stand up to scrutiny from the public.

Why would you sell off the Royal Mint, the third oldest institution in the world and the leading export mint with 15 per cent of the worldwide market? 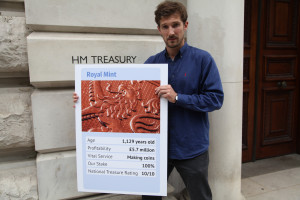 Why would you sell off the Met Office, one of the top two weather forecasting services in the world, which advises governments across the globe? 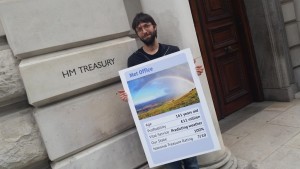 Why would you sell off Ordnance Survey, whose data saves the government tens of millions of pounds and underpins an estimated £100 billion of the UK economy (not to mention its much-loved, world-famous maps)? 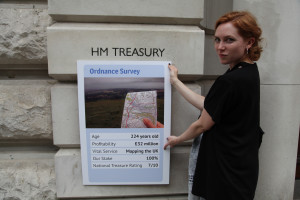 All of these Top Trumps (and almost all of the ten cards in our pack, with the notable exceptions of Royal Bank of Scotland and Channel 4) make a profit for the public purse – millions of pounds every year, coming back to the Treasury, to the taxpayer, to us.

All of these Top Trumps provide a vital public service that we can’t do without. The Land Registry underpins the guarantee of title of £3 trillion of property. National Air Traffic Services keeps 220 million air passengers safe every year.

Many of these Top Trumps are national treasures, loved by the public, part of our shared history as well as being innovative and responsive to the changing times.

We know George’s answer to our question ‘why?’ of course: to make a quick bit of cash, as quickly as possible. And, as he said at the CBI dinner where he announced this policy, to ‘get the government out of the business of owning great chunks of our banking system – and indeed other assets that should be in the private sector’.

But why should these assets be in the private sector, when they are working so well in public hands?

Once our public assets are gone, they’re gone. Of course, we’ll still have to use them. We’ll still need maps, data, land registry documents, a postal service, coins, weather updates.

If this goes ahead, we’ll just end up paying more for them, in hidden or less hidden ways, as taxpayers or as consumers. Just like we pay more for rail fares, energy bills and water bills because these services have already been privatised.

And we’ll have lost out on collective, public services that put the needs of the public – us – above the profits of a few.

When the chancellor recently sold off 15 per cent of the Royal Mail overnight to bankers, he was counting on us not paying attention. Let’s pay attention now, before we lose out again.

Sign up to the Top Trumps campaign today; it’s time to tell George Osborne he can’t play games with our public services.