From bacon sarnies to nightmare Scots to looming 'socialism', the papers line up for the Tories 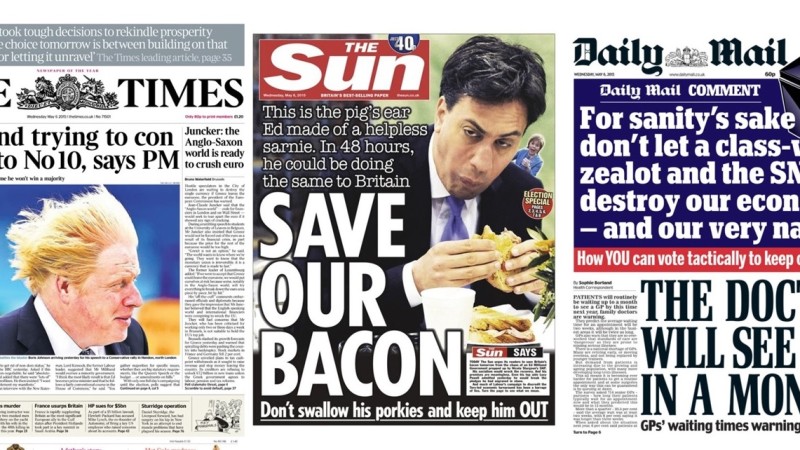 The bulk of the free press in Britain has today decided to celebrate its diversity of opinion and breadth of ideas by saying the same thing.

The right-wing papers have all run front page stories trying to frighten voters into their way of thinking, with overgrown editorials making essentially the same case for the same party: the Conservative-led government has done a good job, Labour (‘propped up by the SNP’ etc.) would wreck things.

Proprietor: Times Newspapers, a subsidiary since 1981 of News UK, headed by Rupert Murdoch 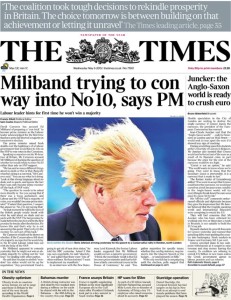 The Times front page presents the Cameron view of things with ‘Miliband trying to con way into No10, says PM’, based on snippets of interviews with the prime minister. Along with its massive leader column supporting the re-election of the Tory-Lib Dem coalition in the name of free markets, business, ‘enterprise and freedom’, the paper has a piece by David Cameron in which he likens Ed Miliband to an ‘arsonist’. 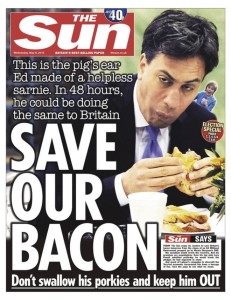 The Sun has again mistaken childishness for wit, re-publishing the photo of Ed Miliband eating a bacon sandwich on its front page the day before the election. The page reads:

“This is the pigs ear Ed made of a helpless sarnie. In 48 hours, he could be doing the same to Britain.

Don’t swallow his porkies and keep him OUT”

It continues with the first lines of a Sun says column – in other words, comment on the front page, where the news usually goes.

Then there’s a two-page spread listing Labour’s ‘lies’ (‘HERE LIES LABOUR’) and writing sarcastic grafitti across Miliband’s limestone block of election pledges. (He should have known this would happen, really.) Then another spread (‘WE CAM DO IT!’), of what is in essence campaigning material for the Tory party, tries to light a fire under readers to get out and vote for their man.

The paper’s full-page Sun says column has a picture of Labour’s Ed Miliband, Ed Balls and Harriet Harman, plus comedians and Labour supporters Steve Coogan, Martin Freeman and (as of Monday) Russell Brand – all with long Pinocchio noses, (because they’re lying, get it?). The piece starts like this:

“Almost 32 years ago Britain overwhelmingly rejected socialism. Tomorrow, we will do so again in vast numbers. But this time, socialism may be forced on us whether we like it or not.”

Golly. (It closes by telling readers to ‘vote Tory’.) 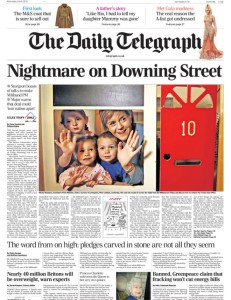 The Telegraph has gone with the ‘scary Scottish woman’ angle, with the headline ‘Nightmare on Downing Street’ above a photo of SNP leader Nicola Sturgeon inside a children’s playhouse at a nursery in West Lothian. The story itself gives a pretty biased account of everything from Lord Kinnock’s predictions to John Major’s warnings to recent comments by the party leaders. The paper’s leader column tries to weigh in on the constitutional question of what happens if there’s a hung parliament. (Guess which side it takes?) 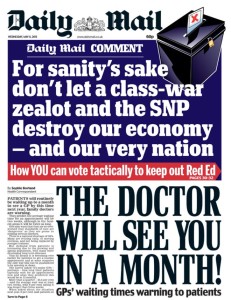 The Mail can barely find space enough on its front page to tell readers how to vote. The paper has a full-page comment piece backing the Tories, with its headline featuring on page one:

Stirring stuff. Then it follows the lead of the Sun yesterday in advising readers on how to ‘vote tactically to keep out Red Ed’.

Proprietor: Express Newspapers, a subsidiary of Northern & Shell, which is wholly owned by Richard Desmond 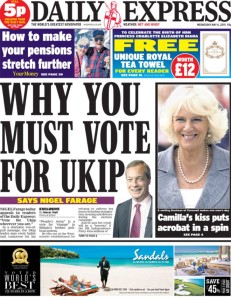 Meanwhile, the Daily Express has come right out and endorsed UKIP, though this was hardly necessary after owner and porn-baron Richard Desmond publicly gave the party £1million last month.

Oh, and last night Russian hereditary oligarch Evgeny Lebedev’s free London Evening Standard came out for the Tories, just after his Independent endorsed five more years of the coalition government. And today the freesheet City AM surprised no-one in backing the Conservatives.

The Guardian has a story about looming health cuts and an unrelated picture of Boris Johnson on page 1 today, while the Mirror has  a picture of Cameron and a very different take on former PM John Major’s recent remarks. The cover is partisan, but unlike the Sun’s, at least it’s news.

The Sun is telling readers to vote tactically to beat Labour