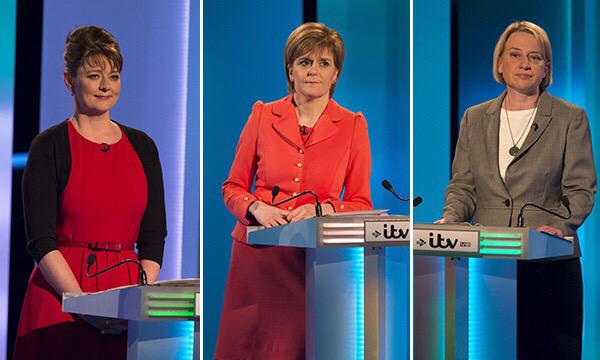 Despite the failure of the Daily Mail’s recent efforts to paint him as a ‘caddish’ love cheat, some corners of the Tory press can’t help but imagine Ed Miliband as a dashing Romeo.

Today the Sun’s cartoonist ‘Brighty’ draws Miliband as a blushing James Bond, with the female leaders of the Scottish National Party, the Greens and Plaid Cymru vying for his attention in their busty red dresses and high heels.This unusually flattering image of the Labour party leader is really an attempt to portray Miliband as a hapless fool at the mercy’s of these Bond-girl femme fatales. 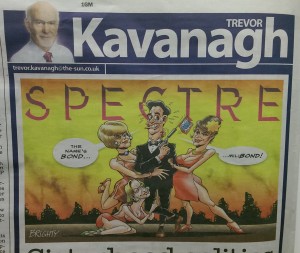 The related column by Trevor Kavanagh, ‘Sisterhood politics won’t be ladylike’, lays out the argument behind the picture. Writing about Thursday’s BBC debate, he says:

“Usually fierce Nicola Sturgeon looked doe-eyed as she bowed and pounced on Mr Miliband like a spider in sight of her prey.

Red Ed needs to watch his back. Nicola Sturgeon may wear high heels and a skirt, but the eerie silence from noisy ex-leader Alex Salmond proves she eats her partners alive.

If the sisterhood holds the balance of power, don’t expect politics to be ladylike.”

As you can see, what we have here is a sexualized argument, where the author talks about certain politicians in a way he wouldn’t dream of doing if they were men. I think it’s fair to say that stories about a post-election deal between the Tories and other small parties will not describe Nick Clegg as looking ‘doe-eyed’, or Nigel Farage as a preying mantis who ‘eats his partners alive’.

It’s true some that coalition stories did use terms like ‘marriage’, ‘honeymoon period’, and even ‘renewal of vows’, but this is standard political shorthand, with nothing to compare with ‘Sturgeon may wear high heels and a skirt, but…’.

In this case, the feminine is married with the partisan to create a unique threat to all we hold dear. As Kavanagh writes:

“In less than three weeks, if you believe the polls, this oddball coalition of Trots, socialists, anarchists and, until recently, obscure nationalists could be running Britain.”

I’m not sure who the anarchists or Trotskyists are in this election (he doesn’t specify), but this is little better than the mild red-baiting we’ve had over Miliband’s alleged socialism (or sometimes ‘Marxism’). When coupled with a lazy sexism, they might as well revamp an old Tory poster campaign as: ‘New gender, new danger’.

Resort to these sordid methods betrays a press which is both shaken and stirred.