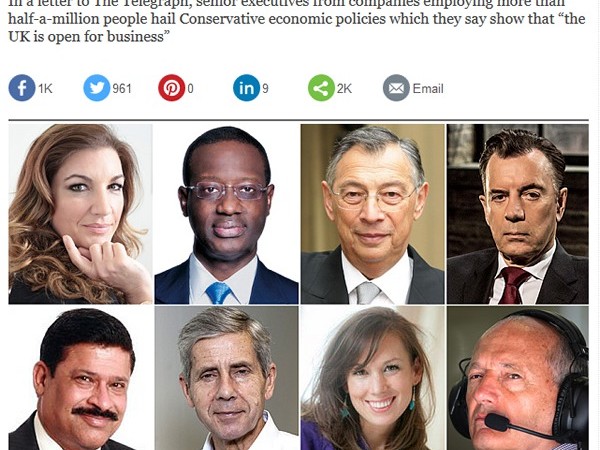 How much weight the public attach to the letter by big business leaders supporting Conservative economic policy depends on whether people think the business leaders in question are motivated by altruism or self-interest.

A quick glance at the incredible wealth of some of the signatories, and the pay policies of their companies, makes it very difficult to believe they are concerned about the lives of ordinary people.

Pay details of selected FTSE 100 CEOs who signed the letter, and are compelled to disclose their pay in their companies’ annual reports, are as follows:

These pay packages do not necessarily invalidate the opinions of the CEOs (though we should be wary of crediting them with the wisdom of Solomon) or have any bearing on whether they are right or wrong about Labour and Tory economic policies.

But such vulgar sums of money do make it easier for critics to argue that the letter’s authors are a bunch of self-serving racketeers concerned only with preserving an economic system that facilitates their own enrichment, rather than public-spirited entrepreneurs who genuinely want what’s best for the country.

Many sensible businesspeople have argued that the culture of executive greed – and the public contempt that it engenders – threatens the long-term sustainability of a capitalist system. The damage that such colossal pay packages do to the credibility of the authors of this letter is a very good case in point.

54 Responses to “REVEALED: The fat cat pay packets of the Tory-supporting bosses”