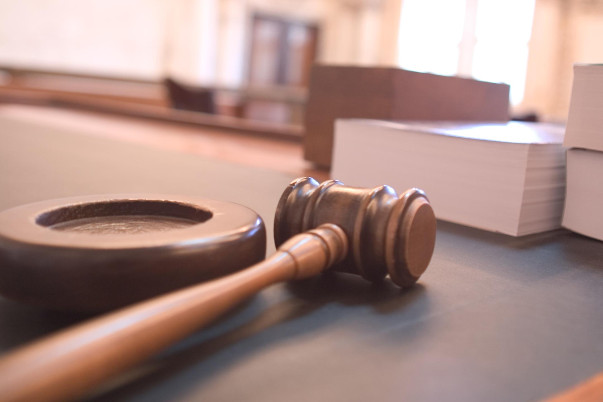 Labour’s promise to overhaul the coalition’s employment tribunal fee system is exactly the sort of policy we need from Ed Miliband’s party – one that shows they have the courage of their convictions.

This is policy that, by promoting workers’ rights and social justice, is likely to provoke hysterical and unfounded accusations from our right-wing press that Labour has declared war on business. But this time Labour has not bowed to the media barons.

Page 15 of the Labour Party manifesto says this:

“Labour will reform the employment tribunal system to ensure workplace justice is affordable.”

It clearly has stiff competition, but the introduction of extortionate fees to bring an employer to justice has to be among the most iniquitous policies we’ve seen in the past five years.

If, for example, you’ve been unfairly dismissed or are a victim of discrimination, you face a fee of £250 to issue your claim in the employment tribunal and then a further fee of £950 – yes, £950 – to have your case heard. If your employer has dismissed you without paying you notice pay or has failed to pay you in full, you have to find £160 to issue your claim and a further £230 for the hearing. (It’s true that there’s a means-tested fee remission system in place but it’s highly limited and ineffective – see below).

Following the introduction of fees in July 2013 there has been a 66 per cent drop in the number of employment tribunal claims. 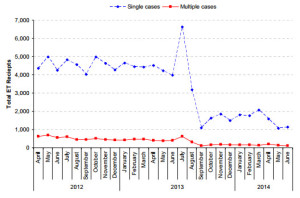 The government’s stated purpose of fees was to end weak and speculative claims against businesses. Fees were also said to be necessary because ‘taxpayers are currently subject to an excessive financial burden as this free service has become increasingly utilised.’ As a government press release put it, ‘Last year, the taxpayer footed the full £84 million bill of running the tribunals, despite the fact that most people will never use the service.’

This claim that employment tribunals were being increasingly used is, well, not true. As the Citizens Advice Bureau points out in its excellent report on the subject, Fairer Fees:

“The Ministry of Justice’s own figures show that the individual ET claims fells for each of the three financial years before fees were introduced (from 71,000 in 2009/10 to 55,000 in 2012/13). So despite a growing workforce, the number of individuals using the free service was dropping.”

To put the £80 million annual cost of running the employment tribunals in context, the tax break for married couples costs around £700 million a year and the bonds for the UK’s wealthier pensioners will cost the taxpayer approximately £350 million. This gives you some idea of the coalition’s priorities.

And have fees succeeded in deterring those with weak claims while ensuring that the genuinely mistreated can still access justice, as the Tories claimed it would?

In fact, of the reduced number of claims that have made it to tribunal since the introduction of fees, a higher proportion of claims have been unsuccessful than before their introduction. This means that fees have prevented a large number of workers with genuine claims and good prospects of success from accessing justice. These thwarted claims will include, for example, women who were dismissed for being pregnant, disabled workers whose employer refused to make reasonable adjustments to enable them to do their job and workers whose employers have not paid them their full wage.

These fees hurt pretty much all employees. Employers know how much harder it now is for employees to bring a claim. The deterrent against exploitative, unscrupulous and unlawful behaviour by bad employers is therefore much weaker.

This is why the Tories’ attempt to pit ‘taxpayers’ against those who use employment tribunals is a false and dangerous dichotomy. Most of us will thankfully never have to bring our employer to an employment tribunal, but a system that provides accessible legal protection not only gives every employee (aka ‘taxpayers’) the security of knowing that they can seek redress should things go wrong, the effect of an accessible justice system provides a deterrent which makes things less likely to go wrong in the first place.

As with most Tory reforms, the groups likely to be worst affected are the weakest in society. The lowest paid, non-unionised workers were already most likely to be treated poorly by employers; now they are even more exposed.

But it’s not just employees who benefit from an accessible employment tribunal system, it is also honest employers. As the CAB notes in its report, unscrupulous employers know that they can unlawfully deduct wages from staff and that very often those employees will not be able to claim back those wages in the courts. Bad employers can undercut honest businesses in this way.

There are those who point to fee remissions in an attempt to argue that the system is fair. But a large number of people who struggle to make ends meet do not qualify for a remission. If you are a single person with no children, you are only able to bring your claim for free if you earn a gross monthly income (note gross, not net) of £1,085 or less. There is a sliding scale of fees after that point and it goes up pretty steeply. If you’re part of a couple and have no children, you are only entitled to a full remission if your joint gross monthly income is £1,245 or less.

If you have children then the threshold increases by £245 per child before you have to pay, but – and it’s a big ‘but’ – child benefit, working tax credits and child tax credits all count towards gross monthly income. This means that very disadvantaged people often find themselves having to pay a significant proportion of the fee.

So Bravo, Labour. So long as it’s implemented right, this is a policy that will make a huge difference to ordinary people’s working lives.