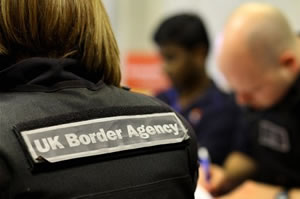 Today Yvette Cooper MP, Labour’s shadow home secretary, will set out how a Labour government could do more to strengthen Britain’s borders. Labour accuse the Conservatives of failing to support border staff in the fight against illegal immigration.

Under this government there have been fewer drugs seizures, fewer people turned away at the border and fewer enforced removals, despite Cameron’s tough rhetoric on immigration. 45 per cent fewer employers have been issued with fines and 88 per cent fewer have faced prison sentences for employing illegal immigrants.

Ms Cooper is expected to outline Labour’s plan to recruit an additional 1,000 border staff, paid for by levying a charge on non-visa visitors to the UK, to help enforce immigration rules. She will also describe Labour’s plans to increase the fine for employing illegal migrants by a third to at least £30,000, and introduce an escalator system for more serious offences, meaning that serial offenders would face even higher fines.

On Thursday night Jeremy Paxman accused the prime minister of failing to fulfil his promises on immigration targets, which Cameron was forced to concede.