What does Nigel Farage actually think about gay marriage, kosher meat and the NHS? His words and policies contradict each other so much it's impossible to know 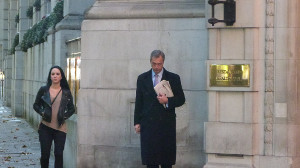 Nigel Farage appeared on the Today show this morning to discuss UKIP’s immigration policy. The UKIP leader seemed to contradict himself and his party several times, telling the programme that he would not introduce ‘arbitrary’ immigration targets, and then that he wanted to get net immigration down to a ‘normal’ level of between 20,000 and 50,000.

Farage was also played a clip from last week in which his part’s migration spokesman Steven Woolfe said UKIP would introduce a cap of 50,000 and reduce net migration by 167,000 per year. He was unable to provide a clear answer on whether UKIP’s immigration policy was numerically focused, but it seems likely that the Conservatives’ failure to meet their own targets have made Farage wary of setting himself up for a fall.

We might expect immigration to be the one policy that UKIP are clear on, but this is not their first major U-turn that has left voters confused:

Over the past few months Farage has repeatedly flip-flopped on his plans for the NHS. In November 2014 a 2012 video was leaked in which he said that he believes Britain should move to an insurance-based health system, prompting UKIP to state that their policies had changed since then.

However in January, Farage told the BBC’s Nick Robinson that he believed privatising the health service was ‘a debate that we’re all going to have to return to’, and that opposition from his party members had forced him to temporarily drop a policy that he believed in. He then said in February that ‘UKIP is committed to a national health service that is free at the point of access and paid for out of taxation full-stock’.

In a leaked document from 2012, several hedge fund managers were named as UKIP supporters, including Rupert Murdoch’s son-in-law Crispin Odey. Minutes for a speech by Farage record him saying:

“People who would have slammed the door in our face 3 years ago are inviting us. The key to money for us will be the hedge fund industry.”

This is despite Farage’s long-standing criticism that the Conservatives are too reliant on support from city investors, and his presenting UKIP as an everyman’s alternative to the bankrolled mainstream parties.

In September UKIP’s economy spokesman Patrick O’Flynn floated the idea of a luxury goods tax at party conference.The 25 per cent VAT would have hit items like designer handbags, shoes and sports cars, and it quickly garnered attention as a possible way to recruit disillusioned working-class Labour voters. But just days later Farage told Andrew Marr ‘I’m pretty certain that while I am leader that will not be in our manifesto.’

The blatant homophobia of some of its members is one of the most concerning aspects of UKIP’s record. Nigel Farage himself has been lukewarm on the subject of same-sex marriage, claiming somewhat illogically last March that he would not support it whilst the UK was still signed up to the European Court of Human Rights. He told LBC Radio that new legislation could force churches to conduct ceremonies that they and their members were ideologically opposed to.

However, prior to this there had been confusion when an apparently unapproved Q&A session with the leader by Pink News was sent to press, in which Farage said that his party were reviewing their policies on the issues, and they would not be campaigning to abolish same-sex marriage. Having denied this, Farage now looks set to U-turn again, with the Mirror revealing last week that UKIP are likely to change their stance on gay marriage (they oppose it but support civil partnerships) in an attempt to drum up public support.

Last month UKIP became the first political party to support animal rights groups in a ban on non-stun slaughter of animals. A statement on their website said:

“Animal and veterinary science has long concluded that cutting the throats of animals whilst they are fully conscious can cause significant distress and pain.

“We see no reason why religious groups should not take into account the concerns of animal welfare when carrying out slaughter.”

This is after Farage addressed a meeting organised by the Jewish Chronicle in 2013, saying he passionately defended the right of the Jewish community to carry out shechita. UKIP’s Jewish candidates reacted angrily to the policy change, with Jeremy Zeid, candidate for Hendon, describing it as a ‘monumental mistake’.

The shechita debacle is one of the most obvious examples of UKIP trying to widen their appeal by telling different groups different things – and hoping noone’s switched on enough to notice.