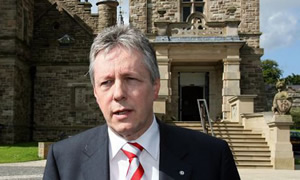 With eyes turned to the future leadership of the Conservatives, details of possible post-election negotiations between the parties continue this morning in the Independent.

In an exclusive interview with the paper Ian Paisley Jnr, the DUP MP and son of the party’s founding leader, goes further than any of his colleagues in setting out the party’s red lines in the event of a hung parliament.

Confirming again that the party could see itself doing a confidence and supply deal with either Labour or the Conservatives, Paisley puts the price of DUP support at around £1 billion extra for Northern Ireland.

Paisley, who in 2010 succeeded his father as MP for North Antrim noted that while Northern Ireland currently gets just under £13 billion a year from the UK government,

“There’s no reason why, over the period of the next five years, that couldn’t be increased by x billion per year. I think that would be a very attractive deal – I’d break my arm for it.”

“We’d have to work that out. But it would be hundreds of millions; it wouldn’t be a paltry sum. It would be something that would ease burdens in Northern Ireland.

“Who knows what’s going to be up for grabs – who knows the sort of influence we would be able to wield? This is a huge opportunity for us.”

Paisley’s calls come after the party’s leader at Westminster Nigel Dodds spelt out further red lines for the party in any post-election deals that may be struck. Writing in the Guardian the week before last, Dodds made clear that his party supported removing the bedroom tax, improving border controls and an in-out EU referendum.

Paisley’s assertions confirm the suggestion made earlier this year by the former UUP first minister and now Conservative peer Lord Trimble, who argued that the DUP might be prepared to do a deal with whichever UK-wide party offered most spending goodies for Northern Ireland.

During his interview Paisley also confirmed that the DUP would, if need be, be prepared to work with UKIP in the event of a hung parliament.

Noting the shared agenda of both parties for a referendum on EU membership, Nuttall concluded:

“Let’s not forget, ourselves and the DUP combined may well have more seats than the Liberal Democrats which then could change the dynamic in Westminster altogether.”

Commenting on such a potential outcome Paisley told the Independent:

“If this is the shape of things to come in the UK – that coalition government is the nature of the game – then I think we have to bite our lip at some of these things and accept that we’ll have to make difficult agreements.”