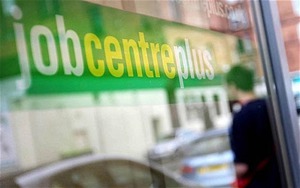 Once again, young people are the furthest from benefiting from this recovery. There were 740,000 unemployed 16 – 24 year olds in October – December, up slightly from 737,000 in July – September. Long-term youth unemployment has fallen significantly in the last year, but we have a way to go before we get back to pre-recession levels and the picture is somewhat worse the longer the period of unemployment we consider:

Although earnings are finally rising in real terms, there is a huge gap to make up. December was the first month since 2009 in which average weekly earnings (including bonuses) rose at a faster annual rate than the Retail Price Index, which is the measure of inflation usually used for pay negotiations. This means that, in our real pay chart, real pay increases – the green columns – are finally positive: 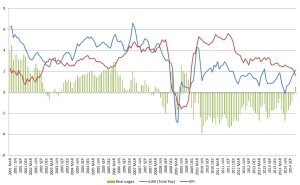 So pay didn’t go down in real terms (hurrah!) but the increase was only about 0.5 per cent. Just getting back to the real wages we had before the recession will take an awfully long time at this rate – at the TUC we’ve projected forwards real earnings at the current monthly rate of growth (using the CPI measure of inflation, which is less favourable to our case) and we calculate that it will still take until the end of the next Parliament to achieve this.

And returning to the pre-recession real value of wages would not be a mark of success. Before the recession, real wages grew at an annual rate of 1 to 1.5 per cent, depending on where you start and finish your measurements. If we had maintained that rate of growth, average weekly earnings would be £80 to £100 higher than the current figure of £489.

8 Responses to “Labour market: Young people are the furthest from benefiting from this recovery”