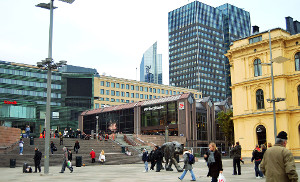 Norway, although not a full EU member, has free trade with the EU through a wider grouping with Iceland and Liechtenstein: the ‘European Economic Area’ (EEA). This arrangement includes the free movement of labour, and since Norway typically tops global wellbeing and prosperity charts, and has a generous welfare state, it has received high levels of EU migration in the past few decades.

Many Norwegians fear excessive EEA migration for reasons similar to those raised in Britain: that foreign workers competing for jobs undercut wages and employment standards, or displace native jobs, damaging the ‘Nordic social model’. Indeed, several studies show that this fear is warranted to an extent, in sectors such as construction.

The government’s approach, however, has not been to limit migrant access to welfare or explore ways of limiting migration (though the EEA agreement does allow this in emergencies). EU migrants who paid tax in their home countries for a year are usually eligible for benefits. As explored here, restricting genuine welfare needs only puts migrants in a weaker position in negotiating pay and labour, so in theory exacerbates the downward tug on overall labour conditions.

Instead, a host of policies since the mid-2000s have been designed to help European migrants integrate better into the economy. Migrants are strongly encouraged to learn Norwegian, an important step not only for skilled jobs but for cultural acceptance. In Britain, comparable language courses are being cut.

Information about Norwegian wage agreements and compliance is widely distributed, and the authorities that enforce labour law have been given stronger powers and additional funding. A new form of ‘joint and several liability’ has been introduced, meaning that if workers are found in illegal or exploitative conditions, not only the immediate employer but also the chain of subcontractors and employment agencies connected to them are answerable.

Migrants are even encouraged to unionise, with identity card systems in construction and cleaning. Public bodies looking to hire for new posts must interview at least one foreign applicant.

This approach is not a ‘silver bullet’, especially given how underdeveloped Norwegian regulation of employment agencies was before 2004, but there are signs of early success. Conditions are improving, especially for migrants that stay longer, rather than being moved around by agencies.

EU migrants seem to claim benefits at a rate lower than the Norwegian average, but receive lower wages too. Jon Horgen Friberg, an academic who identified the current use of Polish migrants as ‘buffer’ employment advocates more integration effort.

Nevertheless, this approach may hold important lessons for Britain. Norway’s efforts to recognise foreign qualifications help the labour market overall, for example, since otherwise high-qualified migrants compete for low-skilled jobs, a problem identified by the British Chartered Institute for Personnel and Development.

Cracking down on actual exploitation is not only a sensible integration policy backed by the Migration Advisory Committee, but also a moral one. Ed Miliband has acknowledged that UK enforcement is too weak, but little has been done. Norway also has a smaller proportion of migrants classed as self-employed, meaning fewer newcomers are off the books, potentially working without holiday pay, sickness cover or hours limitations. There are free evening courses on business and entrepreneurship for those who do choose self-employment.

The theory behind this approach is appealing – if EU workers are competing with natives on a level playing field, there should be less resentment as well as less unequal competition. British Future’s 2014 polling suggests that the UK public do not think of well-integrated migrants like students and British university graduates as ‘migrants’. If new arrivals are well-integrated, we don’t see them as a problem.

Jonathan Lindsell is a research fellow at Civitas think tank and a freelance writer. You can read his full study here