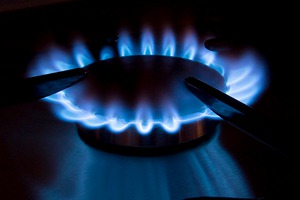 The Competitions and Markets Authority has this morning published new analysis on the energy industry. It clearly shows how the Big Six energy companies have been taking their loyal customers for a ride.

The report finds that from 2009 to 2013, electricity prices grew by 24 per cent and gas prices grew by 27 per cent on average. But this masks “considerable variation in the profits and average prices associated with different types of tariff”. For example, revenue from customers on the most common standard variable tariff was “12 per cent higher than average revenue from other tariffs for electricity across the large energy firms and 13 per cent higher for gas”.

The chart below (click to zoom in) shows how the Big Six failed to pass on reductions in direct costs like the wholesale price, network costs and policy costs. Indeed, from 2011 onwards these costs held steady while the simple dual fuel bill continued rising. 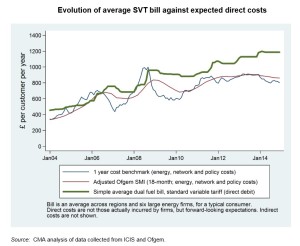 The evidence could not be clearer; yet these practices have been allowed to carry on for years. In April 2012, IPPR published The True Cost of Energy, which observed that 5 million people could be being overcharged and that these returns were being used to “cross-subsidise loss-leading, discounted tariffs targeted at more active consumers”. We outlined how “vulnerable groups are overrepresented among sticky [or loyal] customers and therefore stand a greater risk of being overcharged”.

The government’s approach to date has focused on encouraging consumers to switch supplier. But in a more recent report published last September, IPPR outlined how switching rates overall were declining rather than increasing. The simple fact is that most customers do not want the hassle of shopping around for the best deal and just want to be on the cheapest tariff.

Echoing IPPR’s analysis, Professor Dieter Helm says today: “Switching is never going to be enough. What is needed is a simple, transparent default tariff, indexed to the wholesale price, with a published fair margin, to protect the vulnerable and those who remain loyal to their suppliers.”

The energy companies have got away for too long with fleecing their most loyal customers. Today’s CMA report must be the beginning of the end for that practice.

Will Straw is associate director for energy, transport and climate change at IPPR