With plunging oil prices leaving Venezuela on the brink of default, what hope is there for a political settlement? 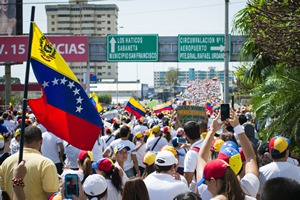 The untimely death of Hugo Chavez deprived the Bolivarian revolution not only of its leader, but also of its future. Always closer to a cult of personality than a political revolution, the Bolivarian project lacked a coherent ideology or clear goals to drive it forward in a post-Chavez era.

But it is with the recent collapse of oil prices that the Bolivarian revolution truly comes to an end.

A fact often forgotten about Chavez’s popularity is that it was always closely linked to the price of oil. Despite being astronomically popular in the aftermath of his election in 1998, his popularity had fallen to 29 per cent by early 2002 – a year in which the price of oil averaged just $29 per barrel. But this decline was reversed as oil prices started to rise and in 2011, when prices had almost quadrupled to $111 per barrel, Chavez’s popularity had soared to above 50 per cent.

But commodity booms do not last forever, and the revolution made little provision for the future, putting no money aside to ensure social programs remained funded in a post-boom era. As oil prices continue to slide, government spending on social programs (and everything else) will have to decrease too. This will further erode the popularity of Chavez’s successor Nicolás Maduro.

The fact is that Venezuela’s finances were in serious trouble even before the recent drop in oil prices. For years the government relied on debt to finance its spending, but creditors were already becoming unwilling to lend as the debt burden skyrocketed. Now, by automatically reducing the value of Venezuelan oil exports, the drop in oil prices has raised the spectre of a default. And with that, the revolution is essentially over.

There is little that Maduro can do to reverse the downward spiral now engulfing Venezuela. His only hope was that oil prices remained high; it is now clear that sooner or later he will run out of money. Without the charisma and popular appeal that allowed Chavez to charm his way out of political trouble, it is difficult to see how the Maduro government can survive.

The transition to a new government will be difficult as a result of one of Chavez’s most pernicious legacies: the destruction of the country’s state institutions and political organisations. This allowed Chavez to concentrate all of the power of the state in his hands, and few dared to make decisions that went against his wishes.

This was true even of the central bank and the judiciary, which were supposedly independent of the executive. The case of the judge Maria Lourdes Afiuni, who was incarcerated after issuing a court ruling that angered Chavez, shows the price that was paid by those who challenged his authority.

Consequently, a solution to Venezuela’s current problems will have to be found outside of the framework usually provided by state institutions and political organisations. This will require a consensus between both sides of the political divide.

The opposition supporters who wish for a complete break with the Maduro government must realise that entirely removing the regime runs the risk of creating a power vacuum, the consequences of which could be catastrophic. On the other hand, those on the government’s side who oppose a compromise with the opposition must accept that it is the only option to stop the country’s collapse.

The first step is for the government and the opposition to realise that Venezuela needs a national unity government that represents both sides of the political divide. While polarisation can be a successful political strategy – it worked for Chavez – as a governing strategy it is doomed to failure.

Polarisation creates instability, and an unstable government cannot reconstruct the state institutions or deal with the imminent economic disaster facing Venezuela. Hope lies only in both sides agreeing to work together.

26 Responses to “Comment: Venezuela: Hope lies in both sides working together”