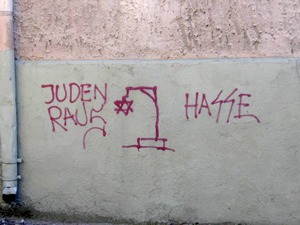 The horrific terrorist attacks in Copenhagen over the weekend, following those in Paris last month, reveal the deep hatred of liberal modernity that lies at the heart of antisemitism.

In both cities, the murders of Jews followed violent assaults on free speech. In Paris, cartoonists were killed for having dared to depict Muhammad as they depict countless other people. In Copenhagen, simply the act of discussing the right to depict Muhammad in that way was sufficient to attract the terrorists’ bullets.

There is little value in trying to find a rational explanation for this murderous irrationality. Instead, true explanations lie in an understanding of irrational ideologies and their use of antisemitism.

As Martin Kramer wrote about a different terrorist atrocity against Diaspora Jews over twenty years ago, ‘only someone persuaded of the existence of a world Jewish conspiracy against Islam’ could imagine that killing Jews in the Diaspora will benefit Palestinians.

Similarly, only someone who sees a Jewish plot behind every perceived ill that befalls Muslims and Islam could move so smoothly from killing cartoonists to killing Jews.

There has been much debate over whether Europe is the arena for a ‘new antisemitism’, different from the old fascist or ultra-nationalist versions that arose in Europe from the late 19th century and gripped much of the continent during the 20th. In this theory, the new antisemitism emanates from minority communities rather than indigenous elites and is focused on Israel rather than individual Jews.

In fact, the jihadist murders in Paris and Copenhagen show that the new antisemitism is not so different from the old. Hatred of Jews is coupled with hatred of the freedoms that characterise modernity and secular democracies, all wrapped together by conspiracy theories.

“We cannot understand what al-Qaeda think they are fighting against and what they mean by ‘Jews and Crusaders’ unless we explore their conspiracy theories.”

Andrew suggested a decade ago that intelligence agencies should appoint an ‘Officer for Fanaticism and Conspiracy Theory’.

We cannot understand jihadist murders of Jews unless we appreciate that antisemitism is an ideology, not a grievance.

It is easy to call the publication of Muhammad cartoons ‘provocative’, as Hugh Muir did for the Guardian, or to ascribe the murder of European Jews to anger over Palestine, as Seamus Milne did in the same paper after Paris.

This is ‘slaughter as political protest’,  Muir tells us. The idea that jihadist terrorism is simply an overheated, misguided expression of a legitimate or understandable ‘protest’ is too superficial an explanation for mass murder.

For sure, anger over Palestine is deeply held, but most who hold it do not attack Jews as a result. Similarly, many Muslims dislike depictions of their Prophet but few kill as a result.

Muir’s admonishment not to be ‘provocative’ by publishing cartoons of Muhammad is even more troubling. For by this logic, continuing to be Jewish in Europe, to visit synagogues or kosher shops, is also ‘provocative’. When faced with jihadist murderers bent on killing Jews, everyday Jewish life becomes ‘provocative’.

Better to recognise that jihadists have assaulted Europe’s core values and also highlighted the reluctance of some to stand by those values. “With rights to free speech come responsibilities”, Muir writes. Sometimes one of those responsibilities is the responsibility to defend the right of free speech against those who would remove it through the barrel of a gun.

Jews are often described as the ‘canary in the coal mine’ of Europe: the early warning of toxins circulating in society that will bring disaster for all. This is not a particularly edifying analogy. The miners’ canaries, after all, were supposed to die first in order to save the lives that really mattered.

There is a deeper truth to the analogy, though. Secular liberal democracy has proven itself to be the best guarantor of religious freedoms and the most hospitable type of society for minorities of all kinds. Jews have enough experience of all the various political systems in Europe’s history to know this fact better than most.

Free speech, with all the risk of offence that it brings, is essential for the protection of minority rights. It is part of the price we pay for our freedom. The best way to ensure that Jews have a future in Europe is to ensure that secular, liberal, democratic Europe has a future of its own.

31 Responses to “Comment: Antisemitism is an ideology, not a grievance”