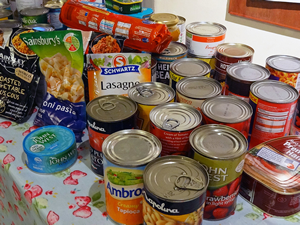 The cost of living crisis has found its most troubling expression in the rise of food bank users. For many people visiting a food bank is tantamount to losing their independence and can be an upsetting experience.

Furthermore, food banks can only do so much – the majority require users to be referred by a GP, job centre or other agency that can issue clients with three single-use vouchers a year. Each voucher provides three days of food – so that’s nine days of guaranteed food per year.

Think tank Demos have today published research into what might be a sustainable alternative: the community supermarket. Found more commonly in the US, Australia and Europe, community supermarkets sell food at below market prices with the explicit social aim of tackling food poverty and its effects (malnutrition, social isolation). They are distinguished from food banks by the fact that they sell groceries rather than prepared meals, and the food is not provided for free.

Demos points out that families turn to food banks when they reach crisis point, and so the work of food banks, while admirable, is to help families ‘subsist’ rather than sustain themselves. The report suggests four models of community supermarket which could be used to address food poverty in a more long-term way:

Ambitiously, the report recommends that the government halve the number of food banks by 2020 and help existing providers to launch community supermarket endeavours.

Although coalition policies including welfare reform have had an undeniable effect on levels of food poverty in the UK, Demos point out that the demand for affordable food is not a ‘phenomenon’ of the post-recession period. Even when the economy has recovered, community supermarkets could provide valuable support for families at risk of unemployment or social isolation.

Demos believes that entering the age of the community supermarket could mean better community cohesion, a dramatic reduction in food waste, and healthier lifestyles for the UK’s most vulnerable people.

8 Responses to “An alternative to foodbanks?”