Blasphemy and critical evaluation of Mohammed’s character have always been forbidden, and have been a highly sensitive issue throughout the history of Islam. 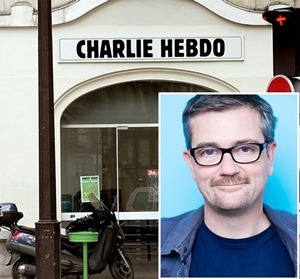 Blasphemy and critical evaluation of Mohammed’s character have always been forbidden, and have been a highly sensitive issue throughout the history of Islam

It is quite appalling to see how some western media figures have responded to the Paris attacks.

Some have blamed the cartoonists for provoking Muslims and inciting religious hatred, while others like Robert Fisk have blamed historic western policies for the murders.

Fisk claimed that the disenfranchisement of youth, economic deprivation, and past atrocities experienced by Algerians led to the Paris events.

Others on the far left like the inveterate anti-American journalist Glenn Greenwald started with Soviet style whataboutism and connected the Paris events with Israel, while the annoying Assange, still languishing in the Ecuador embassy, tweeted some five-year-old Telegraph report to obfuscate the Paris shooting issue.

It’s beyond absurd to blame French occupation of Algeria for the shootings. This is the kind of apologism that facilitates radical Islam. This strategy only results in appeasement of puritanical radical Islamic ideology and only offers one solution: ‘the West is evil’.

If past grievances and atrocities are considered to be the reasons behind these attacks then by this logic all Indians living in the UK would be retaliating to avenge the suffering their ancestors faced during British Colonialism. Bangladeshis would carry out attacks against Pakistan since they once ruthlessly persecuted Bengalis, killing more than a million of them and raping 200,000 of their women.

If Fisk were right, Vietnam and Japan would not be some of the most pro-American countries in the world today.

However the most pathetic and dismal response that came from the western press was from those who castigated Charlie Hebdo and blamed the cartoonists for provoking Muslims.

If one follows this flawed narrative then all liberal Muslims struggling against radical Islam on a daily basis in their own Muslim majority countries should only have themselves to blame whenever they are brutally attacked by extremist clerics and their zealot followers.

The Saudi writer and activist Raif Badawi who is currently being publicly flogged by repressive Saudia Arabia should be denounced for criticising the rabid misogynist clerics of the Wahabbi sect. All Pakistani liberals fighting against draconian blasphemy laws should also be condemned for inciting the wrath of terrorists.

Even a cursory examination of blasphemy killings in Pakistan can tell us that the real reasons why the cartoonists were attacked were not because of Western foreign policy, the Iraq War, or colonialism, but because of an ideology that has always been fanatical and dogmatic in nature and that is responsible for the misery of thousands of people, particularly in Pakistan.

This ideology has the power of igniting vigilante justice and provoking mobs into indulging in violence and vandalism. It’s the same ideology which sent Salman Rushdie into hiding for a decade, and that burnt 37 people to death after a mob set fire to a hotel building in Turkey.

It’s the same ideology that killed prominent Pakistani politician Salman Taseer after he questioned the concept of the country’s brutal blasphemy laws.

According to this ideology, any person who doubts the origins of Islam, draws caricatures of Prophet Mohammad or satirises revered Islamic figures is liable to be punished by death. The basis for this blasphemy belief is not the Quran but the Hadith, the second main source of Islam.

Many sects within Islam have varied views in relation to the blasphemy issue but almost all sects believe in the prohibition on images of Mohammed.

Apart from images, many sects of Islam also consider even questioning or doubting the origins of Mohammed as blasphemous. British Historian Tom Holland had his academic documentary on the origins of Islam cancelled by Channel 4 after he and his family received death threats and over 1200 complaints were received by Ofcom and Channel 4.

To blame this ideology on recent western policies is nothing short of the murder of history. Blasphemy and critical evaluation of Mohammed’s character has always been forbidden and a highly sensitive issue among Muslims in the history of Islam. It is not a new issue.

In 1929, Ilm-ud-din, a Muslim living in British India, took offence at a book published about Prophet Mohammed. He killed the publisher and was sentenced to death by the Indian Penal Code.

Consequently he was considered a martyr; 200,000 people attended his funeral and he was praised by the ideological founder of Pakistan Allama Iqbal. Even today in Pakistan, Ilm-ud-din is used as an inspiration for those who would kill in the name of Islam.

As Douglas Murray said on BBC Big Questions, the attack on 7 January was an attempt to introduce blasphemy laws in Paris.

In the aftermath of this attack, the western media has two options. The first is to reprint these cartoons and continue the unflinching quest of Charlie Hebdo cartoonists, as a way of paying tribute to their legacy. The second option is to take a step back and not criticise Islam or Mohammed, to accord Islam different treatment to other religions.

If the media follows the latter option, it will be a victory for the attackers and their ideology of blasphemy, and will set a dangerous precedent. I hope that the steps we take and our future course of action will not defer to this ideology. But as the responses so far have shown, not everyone is ready to stand up to it.

Anas Abbas is an accountant and investigative Counter Terrorism analyst. Follow him on Twitter or read his blog